You can sort our internet out, right? 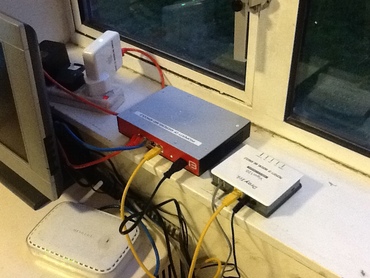 Always fun when you get known to have some clue on any subject, and sadly when relatives know you have a clue it gets worse... I get a call to come and help sort the Internet for my daughter. She is living in a housing association block of flats with her boyfriend. She suggested that they have no Internet.

So I come along, and get through the security gates (which seem as much about keeping people in as keeping people out) and am shown the common room where, to my surprise, they have a phone socket, netgear wifi router, and extra netgear access point. The router has sync, and the wifi works giving a 192.168 address, but no Internet. Hmmm....

Sadly the staff have no idea at all - the manager is not there - they don't really know who does the Internet, and apparently it has not worked for months. It stops working quite regularly apparently and the residents think that the management don't pay the bill, but who knows? More to the point they have no idea on router passwords or DSL login or anything...

Well, as ever, FireBrick to the rescue, an FB2500 and a Vigor V.120. I put an Apple airport express as a good quality wifi, and set about trying to get some Internet working. They managed to come up with a couple of logins and passwords eventually - but they don't work. Now, thanks to the comprehensive logging on the FireBrick I can see they are on a BT 21CN BRAS (RED6.GI-B). So I try an A&A login, and get a very useful response - our DNS servers, a connection on dummy IP and "Unknown user" message. That means 21CN definitely does not have service selection barring and I can log in to any ISP regardless of who pays for the line - useful. We suspected this for a long time, but nice to see it in practice.

So, setting up on our systems, which usefully tell me the circuit ID on the L2TP connection, and bingo we have fixed IPv4 and IPv6.

Now, when someone works out which ISP they actually use, and works out if they are in a contract, and gets a migration code, we can properly move them over. In the mean time we are providing bandwidth and not a line, and they are paying some other ISP for the line and using no bandwidth. Well, they might be paying, who knows - if the ISP has blocked their login it does not matter now!

In the mean time this is effectively the fastest migration I have ever done, and all with no actual details of the existing service, just physical access to the line. A bit scary really.
at October 24, 2011