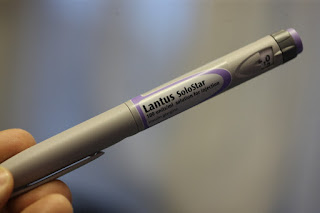 There is a new series on Sky1 at the moment, call "Touch". As a series it is not bad, very watchable. It happened to be on TV last night.

During the episode the main character (Kiefer Sutherland) finds someone unconscious on the floor. He called emergency services - good - right thing to do.

But then he used the man's phone to call one of his friends, who then said "He is diabetic" and directed him to get insulin from the fridge and inject the man - within seconds he woke up and was well - hero!

This is seriously irresponsible. This is prime time TV and watched by a lot of people.

My daughter already had this misconception. She was likening my insulin pen to an epipen used to treat those with sever allergic reactions in an emergency. She had seen that on TV.

Diabetes means that your body does not produce enough insulin, and (once medications are no longer effective) a diabetic will take insulin. A diabetic taking insulin has two main problems because we are using injections to replace what a healthy body does normally:-

1. High blood sugar. This can happen if we forget to take insulin or don't take enough, or even just eat too much. This makes you thirsty, tired, even sleepy. You don't feel too well. It is not good for you in the long term, and untreated diabetics can suffer a number of nasty side effects of long term high blood sugar after many years. Eventually it will kill you. It does not make you pass out or put you in a coma!

2. Low blood sugar. This happens if you take too much insulin, or simply don't eat enough. It makes you irritable and disorientated. It can be confused with being drunk even. It can cause you to pass out and go in to a diabetic coma. This is bad, very bad, and can kill you quickly (within hours).

So, what do you do if you find a diabetic that is passed out? The last thing you do is give them insulin! If you do - you are probably murdering them.

The best advice is call emergency services. If you know the person is diabetic, tell them. They can advise you if there is anything you can do.

Generally, if you can wake them, getting them to eat or drink something with sugar in it is probably going to help. One issue with a diabetic that has been drinking is that they seem drunk - and that is usually "treated" by letting them sleep it off. That is not so good if they have low blood sugar and can mean they never wake up.

I am not a doctor, just a diabetic. But please: don't try administering drugs because you saw it on a TV show.

Of course, on the TV show, the character is given an injection of insulin in the arm with no thought to what dose to give, or which sort of insulin it is. I currently take a slow acting insulin that takes effect over around 24 hours. Even if I did have high blood sugar, an insulin injection of that type would not have an instant effect. But even if I had high blood sugar, a large dose of fast acting insulin could cause the opposite effect quite quickly and put me in to a coma.

There are enough people with diabetes around who should have been able to spot this silly mistake during the shows production. Why was this aired like this?
at May 02, 2012