Many years ago we used to only use BT as back-haul for broadband. Following major issues with BT and 21CN deployment we signed up with Fluidata for Be/O2 back-haul as well. BT have improved a lot since then, not least in part because of the work we have put in to find and report core network issues (congestion, crashing BRASs and some other really obscure issues).

The main reason for a second back-haul is to offer choice to our customers, and specifically to allow multiple line installations to have an extra level of redundancy. The theory is that, regardless of how bad either carrier is, they will not have the same issues at the same time.

I'm sorry to report that we are now starting to see congestion issues in Be/O2. This has been going on for a while, and so far we have muddled through. The main issue here is that O2 are upgrading their network, which is good, but they are behind the usage, so there are cases of severe congestion happening and it being months before any planned upgrades. We have changed customers back to BT, or waited for the upgrades, but it is starting to be a real problem in some areas now.

I have put off blogging on this to be fair to them and give them a chance to address these issues, but we are not really making any progress on this. So, I'm just reporting how it is so that other ISPs know.

I'm pleased to say that we have really got on top of this sort of issue on the BT side - they are proactive in network upgrades now, and are responding reasonably quickly when there are exceptions. They are considering congestion issues (loss and latency) to be a fault, although it can take some persuading.

Fluidata are not, and are in fact pointing out that their "unlimited" Business grade wholesale services are not in fact unlimited. They are blaming unspecified other "super users" for causing congestion ahead of planned upgrades. Apparently we would have to justify excessive usage (excessive, on an "unlimited" service) if our users were the cause of the problem, rather the victim as in this case. That is somewhat of a concern.

It is a shame. I really thought we were doing a lot better with them and that they would take such issues seriously as a fault rather than washing their hands of them. We had lots of discussions on this early on as we had concerns that the pricing model was not one that scaled well. Whilst we all hate BTs expensive back-haul charging, the fact it is based on usage does present a business model that can scale (we'd just like that charge to be lower in BT's case). It seems that perhaps we were right to have been concerned.

The good news is we hope to have another back-haul carrier on line very soon - they do have a usage based model and are priced so closely to BT back-haul that we will be selling on the same terms as we sell BT 21CN services. We don't have any lines live yet, so cannot yet report on how well they work or how they handle faults or consider congestion issues. We'll be able to report on that after a few months I expect. This will give customers even more choice. We'll make more formal announcements on the A&A pages when we can start taking orders, but it will not be long now.

In the mean time, apparently, according to Fluidata, this is not a proper fault and can wait until April to be fixed (or sooner if they get these other super users to stop using as much). Not impressed. 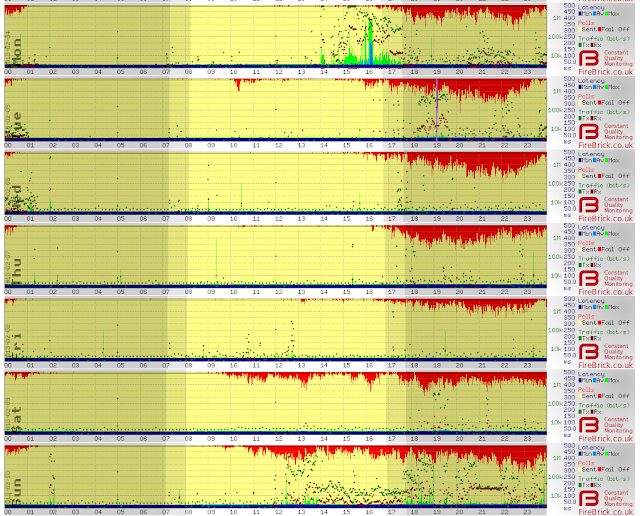 Update: Slightly concerned at comments that I have got the wrong end of the stick. The above line is either considered faulty and so needs fixing promptly, or it is not considered a fault meaning I haven't got the wrong end of the stick. It should not matter if the person we by a service from buys services from someone else or not - all that matters if that the service works properly and is fixed promptly if it is not working. We don't really ask for much!
at February 19, 2013