Not a Licence to Kill, thank you Lord West of Spithead 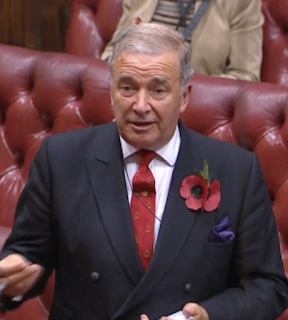 Somewhat concerned that I am perhaps being accused of offering a "licence to kill" to those that would try to harm us (Today 16:59:21 Lord West of Spithead, House of Lords).

Terrorism is an horrific crime, but it is disproportionate to expect us to give up basic human rights in the face of terrorism. To do so is very much to give in to terror. Indeed, in my personal view, stating that there are people out there that want to kill us, as Lord West has done, seems to be the very definition of terrorist - inciting terror to change people's minds.

Yes, terrorism exists, but even the number of arrests under terrorism as stated by Lord Bates in the house a few minutes before (note that they did not state convictions) was only 299 in the past year. Compare any of these statistics to the threats we all face every day from motor vehicles and you see that this legislation is massively out of proportion.

Tackle terrorism, tackle serious crimes, but that is not reason to force people to record every internet connection for every innocent person in the country and put that data in the hands of private companies.

Now, let me be clear, there is, of course, justification for significant steps in terms of "wire taps" and monitoring Internet traffic, when you have someone that is a credible subject in a serious crime and a judge is convinced of that. But mass surveillance (and have no doubt that this is mass surveillance) is a step too far.

It is also pointless. Anyone who is "up to no good" for any reason can make use of any number of means to hide their communications, thwarting data retention and thwarting targeted surveillance - just install a Tor browser, for example. It is literally child's play, so we are giving up our rights to privacy for no reason.

The way to tackle such people is through social engineering and covert operations and even hacking their computer (or "equipment interference" as it is called now). With a suitable warrant - such things make sense.
Posted by RevK at 17:15:00