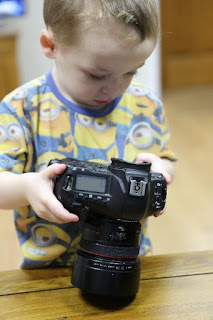 The new Canon EOS 1DX MkII is finally with us. It was meant to be released some time in April I think. Sadly York Cameras closed down a few years ago, so I ordered from Calumet in April, and was on their waiting list. Oddly being a CPS Platinum member no longer helps - why Canon?

They were told various dates by Canon, including end of May, and then 6th June, and then maybe end of June.

I was hoping to try the new camera out on my LA/Vegas trip (7th), and on the wedding blessing (26th) and I was getting rather concerned that it would not arrive in time.

So, I went to LA without my new camera. Surely, if anywhere would have it, then that would be Hollywood!

The concierge at the W Hollywood was very good, calling round camera shops. Best Buy claimed to have them available to collect in store on the Friday (10th) if you ordered. The Canon USA on-line store said in-stock for delivery before we left (6th). But I was very reluctant to order one whilst in the US in case it did not arrive on the promised day and I ended up without it, having paid.

Samy's Cameras have several stores in the area, and one in Hollywood said they would have one in on the Friday (10th). As we did not drive to Vegas until the Saturday, that was the plan.

So on the Friday we went to Samy's Cameras. An impressive camera store! They did not have one, and were puzzled that someone told us they would! They said they had one in the warehouse and could have it dropped in to the store later that day - yay! They took my number (which was tricky as none of us knew our US numbers on our holiday SIMs). I asked about the new WiFi adapter and he checked and only then said "Oh, we don't have the camera in the warehouse". Not impressed.

Anyway, we asked if any other stores had them, and he said no. So we went to Universal and ate at Bubba Gump (they do chicken too). Anyway, when we came back the concierge said they had found one, in Samy's Cameras in Pasadena! (So much for no other stores having them, FFS). However, someone was buying it, but his card was not working! But now they were shut. We should have given her our number!

We went there on the Saturday on the way to the I15, waited for them to open, and yes, they did indeed have one the day before, and the guy's card had failed, but he had come back at 5:30pm and it worked and that was the only one they had. We had missed it by half a day all because of the apparently totally inept sales assistant in the Samy's in Hollywood.

OK, off to Vegas. Again, not keen to order as only in Vegas a few days, but Best Buy says they can get one ordered to the store for Wednesday. We fly back on Wednesday. My plan was to order one on the Monday and see if we can pay for it to be expressed for Tuesday instead.

Thankfully, by the time I got up on Monday, PDT, it was afternoon in the UK and Calumet had emailed saying they had them in at last and mine was shipped for Tuesday at the office in the UK. So no need to go to Best Buy, phew. I decided against DHLing it to Vegas.

Now I am back, I have had a bit of a play with it. The offer of a CFast card does not work - having completed the on-line form it insisted a mandatory field is not completed, but does not say which (and they all are). No reply from their support people yet. Maybe the offer is a scam?

It works well, and is very much like the 1DX. The built in GPS is very good - one of the main features I wanted as I like geo-tagged pictures, and had the GPS module on the 1DX all the time, meaning I rarely took a flash anywhere. Whilst it is very good in low light the flash is a useful addition to some pictures, obviously, and I was having to choose flash or GPS. Oddly the inbuilt GPS is not quite as good - struggles to lock in doors, and has no compass. Why the downgrade Canon?

Another really annoying feature is that unlike the 1DX, the wifi disables auto-power-off! I used to leave the camera switched on. It would auto power off and use no power so would be fine even if not used for weeks to just pic up and take a picture. If in the office or my house it would also immediately upload the picture via wifi. Then, on auto power off the wifi goes off.

Now, I have to faff with turning wifi on and off (in a menu) or turn the camera off, which is a total faff. Also, the GPS in mode 2 carries on checking occasionally when auto power off, but this seems to have no back off or time limit, which means it too will drain the battery after a few days. If I go for the "turn it off" option, then that loses the GPS lock and takes ages to get it again, so I want the auto power off for that, meaning I have to faff with turning wifi on and off. To make it worse, on the 1DX you could use the "transfer on SET" feature when wifi was off - it would turn the wifi on and send the selected images. That would not be a bad compromise, but guess what - that does not work on the 1DX MkII.

These are simple things, but really, why the backwards step Canon? Just make it work, make it auto power off, and back off  the GPS, to zero power usage if left on. Reading some comments on line I am not alone in leaving the camera on, ready to take pictures with no messing about.

Also disappointing that the wifi is not built in yet - it is possible to squeeze wifi on to an SD card even, so why not build in to the camera?

As for focus speed, image quality, etc. I need to do more playing with it. It seems good. The video is easier to do than on the 1DX. Maybe a follow up post on the actual photography aspects in due course.