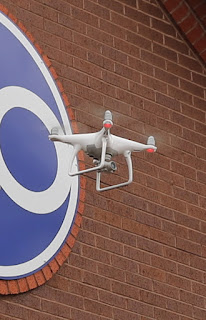 Interesting story today from a friend...

He too has a new Phantom 4, and was practicing flying in the fields that back on to his house a few weeks ago before he went on holiday.

He was not videoing, and whilst it has a camera he was only using to control and monitor the aircraft, so the CAP722 3.7 exception means it is not a surveillance aircraft at that point. Well, we think so anyway. He was being careful, not flying over people or houses. Indeed, much of the field is not even within 150m of a congested area so surveillance aircraft would be allowed anyway.

He just got back from holiday to find a card from the police asking to talk to him. He was worried it was about the drone, and indeed, after about 4 hours of chasing them, the right person finally managed to talk to him and explain that it was.

Someone had complained to the police that a drone nearly flew in to their conservatory. It was not even my friend's drone, but someone else's in the road. They found the kid with the drone and he said my friend had one too, so they went to speak to him as well (and he was on holiday).

They told him (and the kid) to just be considerate. They explained that they get a lot of complaints about drones and there is nothing they can do about it. They even confirmed that if the kid had flown in to the conservatory and broken it, that would be a simple civil matter (no intention of causing damage) and would not even involve the police.

This is good in some ways, not so good in others, and raises some interesting questions...

1. Why did they not simply tell the complainer that "there is nothing they can do about it" rather than wasting time tracking down two other people and talking to them? I am sure they would have managed to say that had it been a ballon or a paper plane.

2. Why did they not actually know that some of the drone flying is illegal, e.g. surveillance over or within 150m of a congested area without CAA approval? They told my friend he was fine to fly his drone if he is considerate. It is even in an ATZ, though for sub 7kg drones that is not a factor.

3. Why are people so hyped up over drones - why not talk to each other if something is causing annoyance in some way instead of wasting police time?

Anyway, good news that they were not being arses about it - that is perhaps the important message here. My friend has now been briefed on all of the relevant rules to make sure he is flying legally anyway. Rumour is that next year the rules should be simplified, and for low altitudes be much more relaxed - I do hope so.
at August 24, 2016