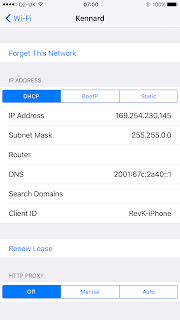 For a long time now my son James, and I, have been cursing Apple. We have iPhones, and iPads and all sorts, but we keep finding the WiFi not working in the house.

To explain the symptoms, in the morning I normally get up and have a bath and use my phone in the bath to check Facebook and twitter and so on, and every damn day I find my phone stops working in some way on the WiFi. Basically Facebook shows blank panes and not loading or things don't show new stuff. I have to go to WiFi settings and I see a 169 IP address (no response to DHCP standard address) as per the image on the right. The fix is WiFi off/on or airplane mode on/off. Sometimes I have to do this two or three times. It pisses me off.

I have done a lot of work on this. The set up is as follows :-

All of these are pretty solid systems, and should not screw up like this. I did loads on the FireBrick DHCP (seeing as I wrote it) trying everything I could think off - tweaking the TTL on responses, changing lease times, all sorts. Nothing helped.

I have pinned down that the problem happens on change of AP, when I get in the bath I am between APs and it moves from one to the other, and that is when it loses DHCP. To add to the fun, it has IPv6 working OK but not IPv4, so extra special.

Firstly, this shows a clear bug in the Apple code - there is "WiFi Assist" to handle poor wifi (and use mobile), but that does not kick in when you have working IPv6 and no reply on IPv4 DHCP. It knows we have no IPv4 on WiFi (hence 169 address). Maybe it should, at least, use mobile for IPv4 traffic!

But my packet dumps suggest no attempt to get DHCP on these cases. We see IPv6 working, but IPv4 packets to the phone, and ARPs to the phone do not work, and there are no DHCP requests.

James spotted the broken "WiFi Assist" and we tried turning that off, but sadly no joy. It is not 100% reproducible, so hard to be sure we have found a fix, sadly. But this did not work.

So what next? Is it an Apple bug, or a Unifi bug, or even a FireBrick bug? So we tried some more.

In some degree of desperation we set all three APs to different SSIDs. This is to see if that works, but the problem is the phone sticks to the wrong SSID even with really low signal as we move around the house. Yes, when/if it changes AP it gets a new IP, but it sits on the crappy signal for ages. It does not switch until it totally loses signal. Bugger.

So what next. Well, I have made the cardinal sin of changing two things at once, and this seems to be working. If I can, I'll update and confirm the diagnosis with one change later.
I have tried many times to break it now, and when moving from one AP to another the phone quickly re-associates with the nearer AP and does not lose its IP addressing at all. It seems to be working! The real test will be the bath, tomorrow.

So, jury still out on if an iPhone issue of a Unifi issue. But we have working WiFi at last.

When we come to reporting this to one or other of them, we will not get far, I am sure.

Update: In spite of all my testing, it just went wrong again, arrrrg! What is worse is that it just sits there with a 169 address not even trying.

Update: I tried changing all the APs to actually be on the same channel, and setting a min rssi. That seemed to help in that nothing broke this morning. We'll see how it goes for a few days. Several of the comments suggest this is definitely an Apple issue but at this stage I am trying to work around it.

Update: The 5GHz has helped, but sadly, today, it failed again, so trying same SSID and channels did not help - next step is try different SSID and set min-RSSI

Update: Using different SSIDs does fix this, and setting min RSSI means they do switch. Not ideal. I tried working our Enterprise WPA but not worked out the RADIUS responses I need yet (If anyone has a pcap that would be helpful). One other simple thing to try would be fixed IP rather than DHCP.
at August 05, 2016