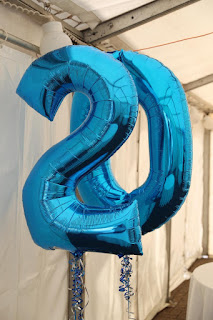 Victoria did well co-ordinating it all. Pictures (here).

We are obviously interested in feedback - we do not do this sort of thing often.

There are a lot of things to arrange with a party...

It was nice to meet some customers.

What could be improved - well the name badges went down well and we managed almost everyone, but a key lesson is not leaving it to eventbrite. We need irc handles and maybe twitter handles on badges next time as well as WiFi details, etc. But they are a souvenir for those that came.

On a personal note - I was worried because of Thomas. We had him on one of the slides even (thanks to my daughter for allowing that). One person said they had not spoken to me since this happened and asked if I was all right. Even with my daughter there, and her partner, nobody made any fuss. Thank you all for that. I was really actually quite worried. Nobody wants to cry in front of a tent full of customers!
at April 02, 2017

Email ThisBlogThis!Share to TwitterShare to FacebookShare to Pinterest
Labels: A&A