Around a year ago I got a drone, and did the right thing and did training, passed a flight test, got insurance, and got (or rather A&A got) a PfCO from the CAA to allow commercial drone operations. 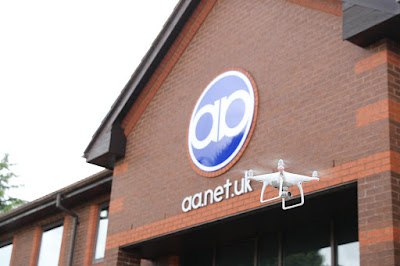 As a company we do like to dabble, and have been involved in many interesting ventures like this over time. Even so, we have not pushed this a lot and in spite of several enquiries we have not managed to sell any commercial drone operations this year. Which is a shame. The one operation we ran internally involved a slight incident with a tree sadly. The insurance was good and paid out.

Even so, not all ideas have to be an immediate success. Our engraving business took around two years to pay for itself. Our 3D printing business is getting close to paying for itself. Our card printing stuff is actually picking up nicely now. Many of these sidelines are also useful in the business (e.g. we engrave front panels for FireBrick FB6000s we make, and use some 3D printed items in the office, and print cards for routers we send out, etc). We have used aerial shots of the office as well, for the business.

The real bummer for me is that even after the training and the tests and the permission and getting the insurance, I cannot even simply take aerial shots of my house! To do so would mean getting permission from several neighbours, some of which are not going to give it (we do have at least one rather odd neighbour).

Now I appreciate that allowing someone to pop to the Apple store, get a drone, and start flying around is not very safe, but I have had the training and got the PfCO and insurance. I understand the DPA issues. I can quite safely fly a drone over my property without flying over my neighbours (although I am allowed to if over 50m even without their permission, the problem is taking off and landing!). So why make the rules so restrictive and nonsensical? It is crazy.

If I can't even do that simple thing, a shot of my own house where we were having work done in the garden, how the hell can we sell services to people?

I'd like to see the rules changed. Yes, make drones identifiable and pilots accountable and insured, that is all fine. Have a test you need to pass - that is fine. It is not different to driving a car. But I don't need my neighbours permission to drive passed their house, for dogs sake!
at November 11, 2017