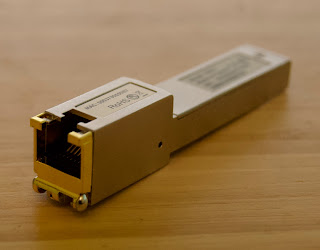 The FireBrick has been around a while, and over the decades we have moved through many versions with a new FB2900 nearly released. We are playing with the prototypes now.

One thing we have never done is include a DSL modem in the FireBrick, and people do occasionally ask why.

I'll be quite frank and explain that FireBricks are designed to last a long time. We have people using FireBricks that are well over 10 years old now and going strong. Including a DSL modem would mean a much more aggressive design cycle as modems are improving all of the time and so are technologies. Basically, we would never keep up. So stick to what we are good at.

Of course, one of the other issues is that one of our main target customer groups is those using multiple lines for bonding, so how many modems do we include exactly?

But a two box solution is not nice, separate modem and FireBrick is not always ideal. Well, we may finally have a way to address this, at least for single line installations.

The new FB2900 has an SFP slot. For those that do not know, these allow a module to be inserted to provide the actual media interface for an Ethernet port. Typical examples are fiberoptic connections or a normal copper cat 5 connection.

What is interesting is that someone makes a SFP module that does VDSL and even ADSL. It looks like an Ethernet media device but actually synchronises and does ADSL or VDSL modem signalling.

The biggest issue is they are very poorly documented. However, for VDSL, we have found that they "just work" in every sense. You plug it in, and it appears as a 1Gb/s Ethernet port, but you then talk PPP VLAN 101 as you would to a separate bridging VDSL modem (unless it maps the VLAN for you, as many do). It talks to the BRAS and goes on line, even handling 1508 baby jumbo frames to allow 1500 MTU PPP. 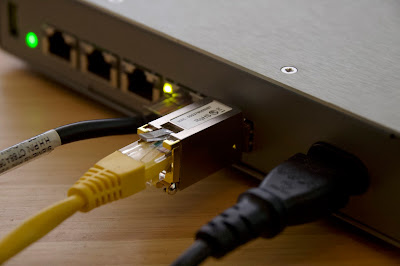 The one downside is that it uses way more power than the SFP specification, but it seems the FB2900 power supply is up to the job. It may be the only time anything in an FB2900 gets remotely warm.

The VDSL works as a standard bridge, and so for typical UK VDSL broadband needs PPPoE over VLAN 101.

For ADSL there seems to be some mapping of VLANs to VCI/VPI but documentation is sketchy and we have yet to find the normal 0/38 mapping used in the UK.