I am playing around with GPS trackers (I'll post more on hardware for this later). This is for commercial vehicles, not anything covert, and I am not going to even touch on GDPR in this post :-)

Reducing the number of points

One of the challenges is managing how often we sample location, and if/how we reduce the number of points. There are a number of reasons to do this:-

One reason to reduce the number of points stored is where the tracker is storing the points - either for download later or for transmission when mobile coverage comes back, etc. The local storage of a small embedded device is likely to be limited. The GPS module I am using has several ways to do this (I have yet to work out how to do other than simple interval). Storing every second, which it will happily do, runs out of space in a few hours.

Transmitting the data over a mobile network has costs. Yes, there are SIM packages with unlimited data, but if you have a fleet of hundreds of vehicles you can do better than each of them on a package for tens of pounds a month and unlimited data. There are packages with much lower monthly costs but data usage costs, and there are foreign SIM packages with roaming for better coverage and higher data costs. Reducing the data transmission can get the costs down to pence a month. This means not only reducing the number of points but finding ways to reduce the overhead of transmission of the data itself.

My plan is to pack data in to an encrypted UDP packet, with a simple resend packet sent back if the data has not arrived at the expected time. I.e. an entirely NAK based protocol so that normally it is one packet in one direction, probably every 10 minutes or so. This means really low mobile data usage.

Reducing the number of points also helps with back-end storage. Hundreds of vehicles tracked every second means a lot of data. Simply increasing the interval loses useful data so you ideally need a smarter way to reduce the data.

Perhaps a small point, with computers and networks being so fast, but reducing the number of points sent to a browser to display a route can make things much more responsive.

Where to reduce points

At present I have code to reduce the points when pulling from a database and sending to a browser, with an option to also delete the removed points from the database. But ideally you want to do this in the tracker itself - that way you have all of the benefits for local storage and transmission as well.

This also creates an extra advantage - if you have a means to reduce data points effectively you can start by collecting much more data in the tracker. The GPS modules I am using can do 1/10 second fixes, so why not start with this, and reduce points from there.

How to reduce points

I pondered how to do this, and came upon with something based on removing points within a certain distance. I then found there is a standard algorithm which is basically very similar to what I came up with. The Ramer Douglas Peucker algorithm.

It recursively takes a set of points. If all intermediate points are within a specified margin of the straight line between start and end, then those intermediate points are removed. If not, the one furthest away is kept and the point from start to this, and from this to end, are recursively processed. The end result is a path of straight lines where all the removed points must have been within the specified margin of that line.

This works well, and removes points on long straight roads but keeps points driving around a roundabout! 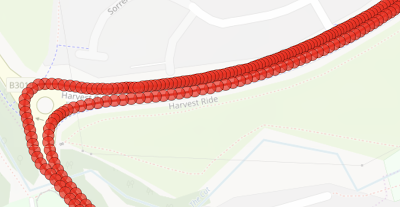 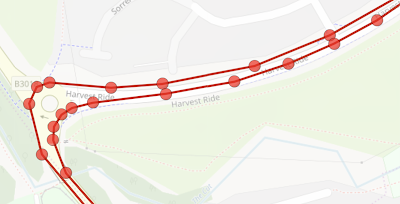 Even setting a margin as small as 1m massively reduces the number of points, and what is even better is that you can start with say 10 times as many points (e.g. 1/10 second fixes) and still end up with similar final number - just that the points you select are more precise (i.e. the exact edge of a turn, not just nearest second).

Of course I won't have a full set of points in the tracker, I'll have to work on time periods, like 10 minutes, collect data, and then apply the algorithm. This means there will be points based purely on time as the end points for the chunks of data I process.

One issue is that the raw data is lat/lon and not ground distances. There are ways to work out exact ground distances around the curved surface of the Earth, but a simpler way is to just assume we can map lat/lon on to a flat plane. What I do is, for each stage of the algorithm, take all lat/lon relative to the middle, and convert to metres. For latitude this is simply multiple my 111111 (yes, apparently this comes from French definition of a metre). For longitude it is 111111*cos(lat), remembering to convert to radians for cos(). This means I can then work out distance from a line in metres with minimal error. Of course as the algorithm recurses and processes smaller line segments, the error because the Earth is not flat (really, it is not!) reduces.

For a change, I am not talking of 3D printing, but we have altitude as well. So I am including altitude in the calculations. This means that a straight road that has a peak hill gets a point kept at the top of the hill!

Yes, 4D printing would be cool, but no, I am now including time in the algorithm. That way we get points if a vehicle stops and starts or changes speed. The only issue here is deciding how time works as a unit in the distance calculation, so I need a metres/second. I have made this small, treating a 1 second deviation from the line between two points in space and time as a small fraction of a metre, hence you have to change speed or stop for many seconds to create a point you keep. It seems to work well.
Posted by RevK at 09:15:00