I have had a very frustrating month with the new card printer and its RFID reader.

The printer itself has been quite fun to reverse engineer, but the smart card readers were not expected to be an issue. The reason is that they are separate (built in) devices that talk USB. Smart card readers are well supported on both linux and windows.

This printer has two such readers, a "contact" station, and a "contactless station" (i.e. RFID).

Oddly, even though there are many readers, including the HID CardMan 5422 which do both in one chipset, the printer actually has two totally separate modules.

The "contact station" worked as expected (apart from needed an adjustment to allow for the gaps around SIMs). Basically, the standard PCSC / winscard stuff just sees the reader, and sees the card, and just works, as expected.

As a result I was able to make the card printing system handle contact cards, SIMs, with ease.

However, from the very start, the contactless / RFID station did not work. It showed up as a Cardman 5121 reader, which was recognised, but showed that the card was inserted already. It did nothing when loading a card on the contactless station.

I was not expecting linux support, but it did not work from Windows. It seems windows recognised the reader and was happy that it has the right drivers for it, and that it should be working. It too just showed the card inserted. 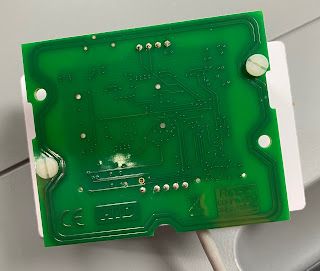 I was slightly worried about the lack of anti-static packaging, but it did the same, it simply showed the card inserted all the time but no actual data - on windows and linux.

They email saying "here are the drivers you need to install". Well, I am not a windows expert, and it took me a while to convince windows to install the new drivers. It was adamant that it had the right drivers, but eventually I managed it, and bingo it works.

They could have told me it needs "special" drivers a month ago.

I admit, now I know, it did take me around an hour of googling and cursing to get working on linux on a Pi, but I managed it. I tried installing PCSC from source, and all sorts. I tried installing linux drivers from HID, but could only find x64 or i686.

Eventually I found drivers for the 5122 model, which claims to cover the 5121 in the README, and a load of others, and is available in ARM format for a Pi. Yay, it works.

A couple of hours later, and we are now doing RFID encoding as a standard feature on our card printing. Finally. And we had our first order, for some cards with pictures on them and NTAG encoding of a URL for a photo site for a couple (looks like a birthday present). Yay! All working, just hold a phone next to the card and it pops up asking if you want to open the web page.