Back on the Mammoth, having re-installed Mastodon.

You don't have to set up your own instance. You can simply join any of the bigger mastodon servers. If you want to make your own, it is still a pain to set up, but the instructions do work if you follow them carefully. Here.

The larger servers are struggling a little right now, after the Musk take-over of twitter has been announced. Seems a lot of people think Mastodon is viable alternative. It may be, but it is different.

It is much more of a "social" network in that you have to socialise, and talk to people, to get followers and find who to follow. But no adverts and no "algorithms".

But I am here, on Mastodon, again, toot.me.uk/@revk so do follow me if you like any of the stuff I do/say.

P.S. As this is a new server, some servers have the old stuff cached in some way, so I may have to follow you first to get it to sort itself out. Let me know if you have problems following me. 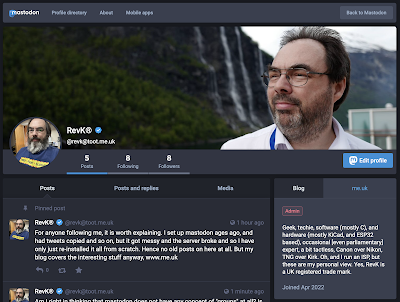 Email ThisBlogThis!Share to TwitterShare to FacebookShare to Pinterest
Labels: mastodon