Thrall to the rescue 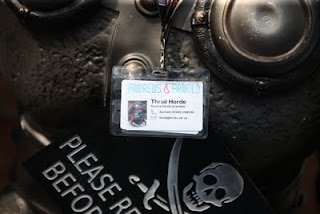 Well, I hope Maureen is OK, whoever she is. Thrall is not known for his work handling emergency calls, but...

Thrall is a 6' fibre-glass orc that lives in our training room at the office. He was a present from a customer (thanks Mike). For those that don't know, Thrall is a character from World of Warcraft, where the main land is called Azeroth. We gave Thrall an ID card, obviously. We called him Thrall Horde, Training Room Supervisor. But when it came to a phone number I gave him Azeroth (02000) 200 000.

Most people assume that is a made up number, as 02000 is not a valid UK area code, obviously, as it would mean a London number starting 00. Now I probably should have given him a number from the blocks reserved for fiction, but I am not sure I wanted it to look like he lived in Walford. In fact I wanted a number that worked, just for fun. What people do not generally know is that 0200 is a special prefix which is used for hidden phone numbers used internally in the telephone system. They are used as the real numbers behind things like 0800 number and are never called directly so don't need to use up normal number spaces. They can however be called, and Thrall's number gets me!

So, this morning, in the bath, I get a call for Thrall (yes, waterproof phone, and all that). Now, he gets very few calls, either wrong numbers, or the odd customer checking if the number is real. Someone even gave the number to some debt collection agency, LOL. However this time I get what sounds like an old lady and I realise she is saying "please help me". She seems not to be able to answer me and after a while she hung up. I called back and got an answering machine explaining that it is Maureen's phone and she is hard of hearing. Eeek!

OK, so this is a case of calling 112. It is rare one calls emergency services. I had not set up location data for my phone in the house (done now!).

The operator started by asking police, fire or ambulance. I explained the call and he said I had to pick one as he can't pick for me! This seems odd, as how am I in any better position to decide - he is the one with training not me, and anyway I thought they were meant to be able to handle silent calls even!

We agreed police, and then he wanted to know where I was. I said Bracknell, and after a while he could not find it and asked me to spell it. Twice I said it would be better, as the caller was a London number, to put me through to police in London, but no he went for Thames Valley instead.

Thankfully the police were much more on the ball - took the details and said they would contact the Met police to check it out. I'll see if I get a follow up call later. Would be nice to know what happened. And I do hope she is all right.
at July 19, 2011