When is a filter not a filter

When you don't have any phones!

The typical ADSL/broadband filter contains a number of components to filter the telephone line from the broadband line parts (which use different frequencies).

The usual arrangement is a plug-in filter, which has a phone plug, and then has a phone socket and a modem socket on it. There are also faceplate filters which do the same, but also filter the extension wiring (which connects to the back of the face plate).

This picture gives you some idea, with the normal passive faceplate (left) and a plug-in filter (right).

What surprises many people is that the broadband part of the filter is pass through. The two wires in the phone line go straight through with no change at all from the plug to the modem socket. The filtering is all on the phone side. It stops any unexpected sounds from broadband getting to the phone, and stops any unintended high frequency from the phone affecting the broadband.

If you have a broadband only phone line, with no extensions and no phones, as increasingly common, you do not need a filter. All you need is a means to connect the modem lead (RJ11) to the phone line.

The answer is a non-filter modem-only faceplate like this (below). These have RJ45 sockets (8 pin) which means they can connect directly to structured cabling but they are designed to take an RJ11 modem lead directly as well (as RJ45 is normally). 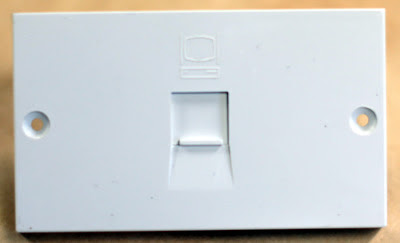 This has much less in it - and so less to go wrong. It has no phone socket, but also specifically does not have the extension wiring connection at the back either, which is important. Even with no phones in use, normal filters can be a cause of ADSL/Broadband issues if they develop a fault. This faceplate, however, is so simple there really is nothing that can go wrong that is not a direct short or open-circuit. 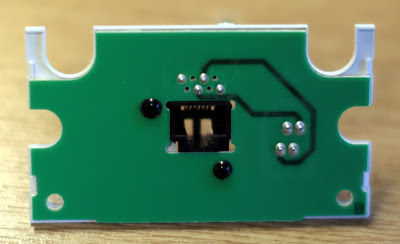 There is one downside, which we are bracing ourselves for now that we are sending these as standard for any broadband-only phone lines, and that is that BT engineers expect a filter. They have been known to go to a site that has no filters (modem to phone plug leads) and fit a filter, leave, and say that this was the cause of the fault (not having a filter). We expect they will be confused by these face plates, but we may be surprised. We'll see.
at January 28, 2013