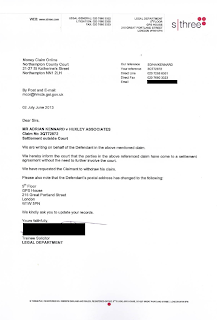 Huxley said they were settling, and even wrote to the court to say so.

They seem to think that my blog "infers[sic] that we have accepted liability". Given that I posted their letter which clearly states that they were settling on a without prejudice commercial basis, I can hardly see how my blog could imply that they accepted liability. It would have been nice if they had taken responsibility for their actions, but that was clearly not the case.

They think they can buy my silence by paying me the £30 that they had already agreed to pay. They also think they can get me to agree to remove things from any other website, public platform, or portal - as if I had the power to do that!

So, lets see them in court! I am looking forward to it.