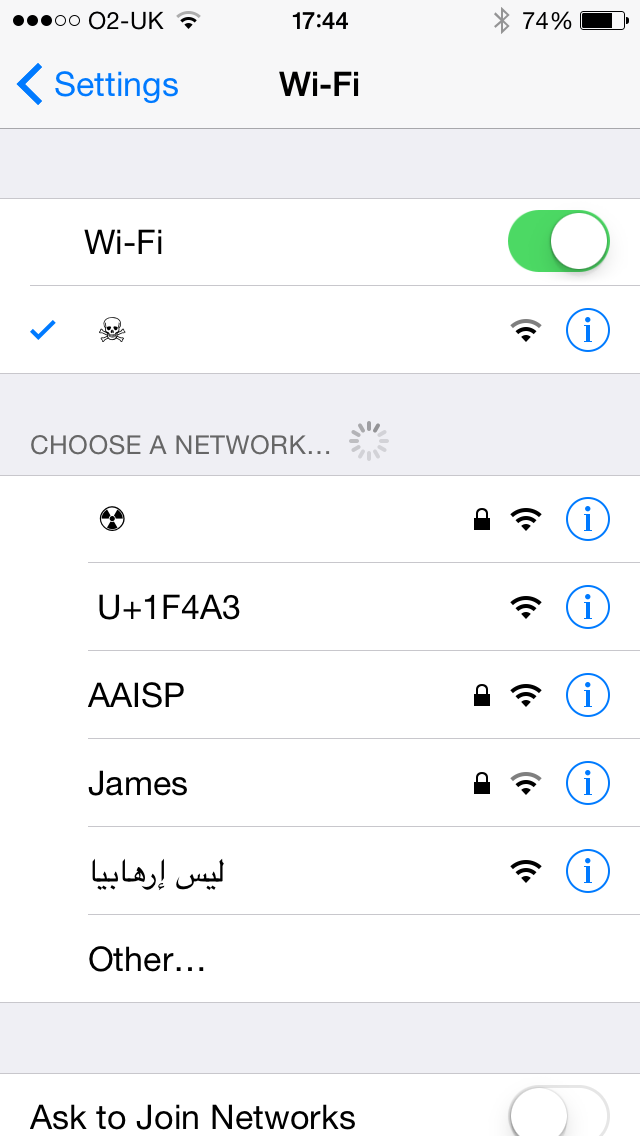 Someone saw a WiFI SSID of "Al-Quida Free Terror Nettwork" and reported it, the result was people kept on the plane for 3 hours.

There are so many issues with this, it is quite unbelievable. What amazes me is the reactions to the post with some people thinking it was right to report or take action. To add to the surprise my wife thinks it was right under the logic of "what if there had been a terrorist and they had ignored it?"

I am sorry, but no. This has gone way way too far. I have no idea why someone had that on their phone. Could have been done in jest long ago and still like that. Lots of people have silly SSIDs. For a while I had "Darth Vader's private AP" but that does not mean I am in fact Darth Vader of have access to a Death Star with which to blow up a plane. Nobody in their right mind would think so.

I do actually have a device with an SSID of ☢ (ionising radiation sign) and one of ☠ (toxin sign, skull and crossed bones), both of which are internationally recognised hazard symbols - will that get me strip searched next time I go near an airport? If not, why not?

It seems 100% clear to me that a terrorist would not have their phone / device labeled "Al-Quida Free Terror Nettwork", especially as that is not even how you spell Al-Qaeda. Indeed, I would think that a terrorist is far more likely to have a device named "iPhone4". Should we stop planes every time that device name is seen as more likely to be a terrorist than one labeled "Al-Quida Free Terror Nettwork"? After all, what if there really was a terrorist and we had not checked someone with a phone labeled "iPhone4"? The logic is not there!

Even if the phone belonged to a "terrorist" that had some how forgotten to change his SSID (yeh, let's assume the paranoia is valid for a just a second). What then? Airport security does not try to stop a terrorist getting in, it simply tries to stop a terrorist getting in with the necessary tools to do anything terroristy. And if those measures work, as they presumably want us to believe, how is it that one with a silly SSID poses any more threat than one with a normal SSID? How exactly?

Seriously, if there is something that actually suggests a terrorist, or criminal of some sort, then please do investigate. But for something which simply could not possibly indicate a terrorist, or indicate a threat in any way, why the hell inconvenience a plane full of people - really, what is the point?

The only purpose is to undermine any public confidence in the security and ridicule the authorities.