Do they not teach decimal numbers in school any more? 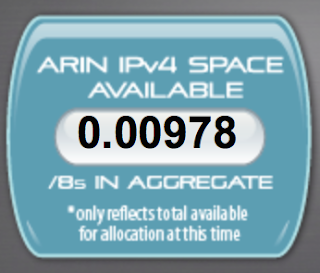 The ARIN IPv4 depletion web site shows how much IPv4 space is left for allocation in the American region.

It is a number of "/8s" left. For those that do not know, a /8 is 16,777,216 IPv4 addresses, and is the size of block allocated to each region at a time. The top level /8s ran out ages ago, and 4 of the 5 registries are no longer allocating IPv4 normally (most have policies on final allocations from remaining space). ARIN is down to the wire and shit will finally hit the fan any day now.

What I find most amusing is the explanation on that page, to explain a simple number, like 5.22 as apparently the meaning of "5.22" is not clear, well, not to Americans?

Of course, this explanation is fine, to explain a number like "5.22", and you can probably guess what the counter was when someone wrote that explanation. But reading it now, does that mean we have 0 /8s and 978% of another /8 left?

It is reminiscent of the 0.002 cent argument someone had with Verizon...


A NOTE ABOUT OUR /8 INVENTORY COUNTER