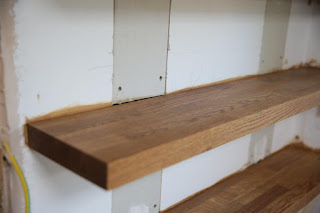 Having spent a month on this project, I felt it is worth writing a few articles on some of the things I have learned.

This one is on floating shelves.

The first thing - someone asked on my blog comments "Why floating shelves?". Well, FFS, they look better. Same reason you have frickin lasers on the sharks, obviously.

My decision on the worktop and shelves was mainly based on how well the kitchen worktop had come out being solid block oak 44mm thick worktop, stained and oiled. This was my "theme" for the whole project after that. It is a somewhat timeless style (wood never goes out of fashion).

Sadly this is not a cheap choice, it is several hundred pounds per worktop (3m x 616mm x 44mm). I have some shelves 308mm deep over the bar and some 200mm deep for bookshelves. In total I used 5½ worktops!

The worktop has used some serious worktop brackets. A floating worktop would have been near impossible - maybe if short and with ends fixed to something, but this is 4.75m long. Even so, these brackets, which are rated at something like 400kg, and height adjustable, are pretty good. 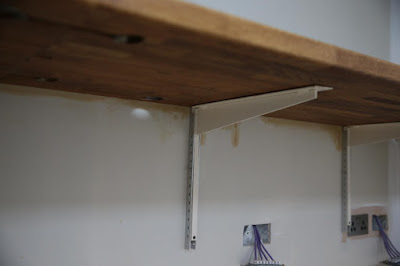 However, the shelves will look nice "floating" with no visible brackets. The way this normally works is with fixings like these :- 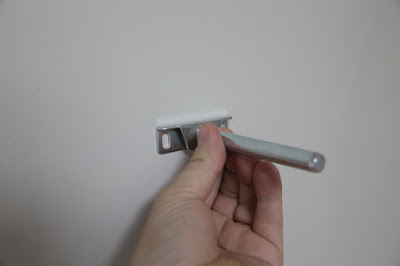 They screw to the wall, and you make a hole and route out the back of the shelf to hide the bracket within them. The rod can be screwed in against the back plate to lever it up a bit so as to make the shelf level.

The big concern I have is the leverage on these. As you can see, it is down to the screw and the back which is as little as 5mm height on to plasterboard. The rating is apparently 25kg, but even that I find hard to believe.

So, what I did was have them dig out the plasterboard and fix vertically directly to the stud work which is fixed to the wall. This means at least 55m of leverage screw to screw, and not on plasterboard but something more solid. The hole in the plasterboard needed to be filled. To level it I had to put a washer behind the bottom screw, but that was easy enough/ 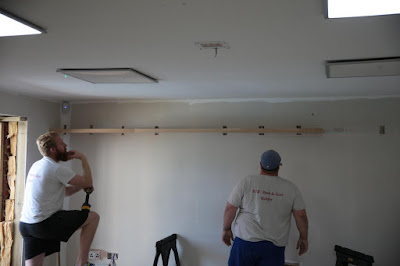 However, the result is a shelf that is 308m deep, 4.75m long, and 44m thick and from which I can hang with my weight! We did use nine of these fixings though, just to be sure.

The other shelves were more of a challenge - not because of this way of doing things, but because of breeze block. It is a building material which loses a fight with a small butter knife. It is horrid. They had to put strips of wood up the whole height of the shelves using 6" screws right through the breeze block, and resin to fix it in, and then do the same trick with the floating shelf brackets screwed to that. The end result works, but even though much smaller shelves they are not quite as sturdy. However, they are good, and will hold up books and bottles of whisky.

Update: Whilst the long shelve is really rock solid, the one over the bar is not so much, and nearly resulted in a whisky related accident. Updating to have a support at the end.
Posted by RevK at 16:54:00