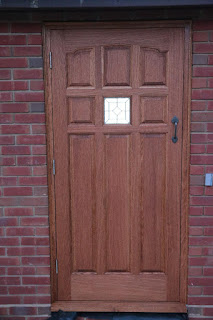 The carpenter was somewhat sidetracked on another job most of today, but managed to do the trim around the outside door, and around the loft hatch.

The decorator (Steve) however has made a lot of progress, oiling the worktops, staining the internal door, and filling more holes.

I expect one or two more days of work internally with the carpenter, and the rest is all decorator now.

I was slightly worried about the door yesterday. We nearly took the frame out when the wind caught it. Now that it is finished, it opens wide and hits the drain pipe before the door hits the brickwork at the hinge, so "safe" in that respect.

However, I have ordered in a concealed door closer that fits in the top of the door and the frame. That will stop it opening too far, and close it automatically. The spec is for 80kg, and the door is only 50kg, so should work.

I was also concerned that the lock sounded like it was straining, but it seems to be working well. It is a high torque motorised lever bolt that comes down in to a "V" receiver which pulls the door cleanly on to the weather seal. You can see the door pull in to place as it closes! It is actually working really well.

From a security point of view, as someone else pointed out, the hinges could be popped and allow the door to be opened from the wrong side. I have a pair of good quality hinge bolts coming tomorrow to solve that one. The door has a sensor, and the lock bolt has a sensor, either of which will cause an alarm if someone tries to force it. I may go for Kensington locks on kit in the room as well just to be extra secure.