Live TV interviews (Using DSLR with Skype on a Mac)

I have done quite a lot of live TV interviews on BBC, Sky News, and RT (Russia Today). If you want me to do a TV interview on anything Internet related contact the AAISP press office.

The first interview was with Sky News, and was in a studio. I had a few days notice. It was all very scary and new, but one can get used to anything. These days it is much more relaxed. RT tend to give a couple of hours notice.

Interviews with BBC were also in a studio. I have been in three different studios now. When RT called for an interview, with only a few hours notice, they suggested a studio, but then said "or we could use Skype". Well, I am not a Skype user, but a choice of install Skype or spend all evening travelling to and from a stupid for 3 minutes on air - I chose Skype.

It was pretty simple - install Skype, wait for a "call", and live TV interview. 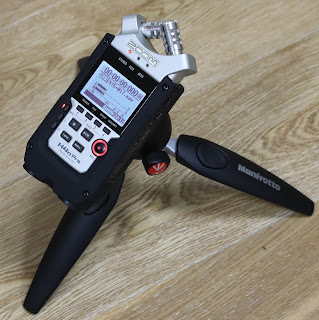 After many RT interviews like this, for the latest (a couple of days ago) I thought I would try something better. We have some good audio/video kit now at work, and so I plugged in the Zoom H4n Pro via USB. It is obviously much better quality than the inbuilt mic or the headphone mic. When you connect USB it prompts for mass storage or audio, and so I picked the latter - as if by magic I now have H4 as a new audio input (and output) on my Mac, and Skype can see that.

Whilst waiting for the call on Skype I googled a bit to see if I could use the Canon DSLR camera as a web cam. I found a solution, which was very clunky, but worked. I have since seen some other s/w that supposedly works more directly with the camera, but not tried that.

The process is pretty simple though...
This is the end result (this was recorded using a camera pointed at a TV so is not that good).

As you can see, the video is not that bad, but something horrible has happened with the audio! I sound a lot more Micky Mouse than usual and I seem to be stuttering!

From what we can tell, when I plugged in the H4n it offered 44.1kHz or 48kHz. I just picked the default (44.1kHz). I can only assume something (maybe Skype) assumed it was 48kHz, and so processed the audio as higher pitched, but then kept running out of audio and so repeated a fraction of a second hence making me stutter. 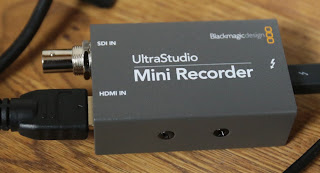 So, I am trying to do better! I ordered a Blackmagic design Ultra Studio Mini Recorder which does HDMI or SDI to Thunderbolt. This is not that expensive but it is important to realise that it does not do HDCP so cannot capture from Sky, etc. It is find for a DSLR that has HDMI output though. It is worth getting a thunderbolt cable too and I had to get a mini HDMI to full HDMI cable to work with the camera.

This is not the end of the fun and games though.

First off, getting the camera to play ball...
So, with the camera working, I turn my attention back to audio. My plan was to either use the H4n via USB as before (but 48kHz this time) or use audio line out in to camera external mic. The idea of the latter is it means audio / video via HDMI so should avoid A/V sync issues.

Turns out A/V sync issues are a nightmare!
I need a longer thunderbolt cable, and a USB extension lead. I am still using the Apple headphones for the audio output (talkback so I can hear interviewer). But I think I am ready for my next interview now - and I know to check my A/V sync before I start this time! 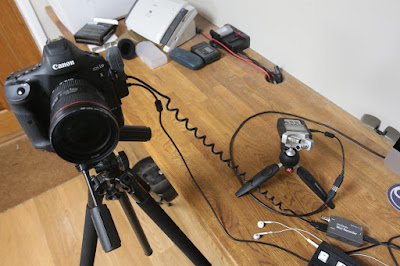