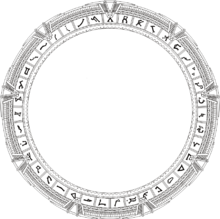 I am a bit of a fan of sci-fi, and have, of course, watched Stargate SG-1, Universe, and Atlantis. All great Sci-Fi, even with many flaws (6 points in space, FFS).

I was pondering the Stargate view on "gods". I think it is actually quite interesting, to be honest.

The basic story, back to basics, is that the Goa'uld are a parasitical (snake like) creature that needs a human (or something similar) as a host and pose for the local population as a "god". They have advanced technology, and supposedly posed as a variety of gods (and even the "devil") on Earth over the millennia.

So it makes you wonder on any sort of definition of "god". Purely due to technology, which the Goa'uld keep secret (even from Jaffa), they can create the impression of being gods. But is superior tech all that you need to meet such a definition? Perhaps it is?

What is interesting is that the worshipers in this case have a tangible god, which nobody on Earth has. They can see their god, and the acts he performs (using high tech), so there are no agnostics as they know the power the gods have, and presumably no atheists either (but that depends on definition of "god"). Given that they exist (in the show) the Goa'uld are more tangible and plausible "gods" than anything any Earth religion has to offer.

But as time goes on, the followers are convinced to recognise them as "false gods", and simply technologically advanced aliens that they are. Yay for the rebellion!

So what next? Well the show goes on to discover "ascended" life forms. These are formerly people (ancients) that have ascended to a "higher plane" and now are pure energy. One of the main characters (Daniel Jackson) even manages it, and by a convent plot twist he even comes back. They have control over natural forces and more power than the technology of the Goa'uld but all done without using technology.

Surely these count as actual "gods"? They even have a code of conduct preventing them interfering, except when the script really needs then to do so, and so are like Earthly gods that do fuck all to actually help people. That has to be the hallmark of a "real" god, surely?

We then have the Ori that never got the memo on not interfering and rule a whole galaxy by force, gaining power from worship somehow. Surely they must be actual gods, with the power, and the tangible and evidentiary presence?

Then the show goes even more whacky with Stargate Universe, and the idea that the ancients (that ascended later) found a "message from god", or at least some meaningful structure in the background radiation from the big bang. An intelligence at the start of time. Maybe that signifies a (the) real god?

Interestingly, they encounter (or rather don't) aliens that made a solar system and returned some settlers to them (only to re-live how they died?!). Maybe they are gods too?

What really got me, while watching all of this, was not any of these so called gods, they all meet a definition of a "god" in a context, but the acting of the Americans in many places that assumed there is some "one true god", the "in god we trust" crap they have on the dollar - that type of deity. Of all the acting and fiction, the way they talk about one god of one religion on Earth, one of thousands, is what made me cringe and feel it was the fiction is it. Sadly, I think a lot of Americans actually think like that. Oh well.

P.S. Perhaps what I am trying to say here, in any debate on religion, is you probably need to start by defining what you think a "god" actually is, before you can say whether there is a "god", and whether such a "god" is doing its job and/or worthy of any praise.
at November 04, 2017