Having discussed the pokey thing for iPhone SIM trays some evil person pointed me to a link for Universal Paperclip... http://www.decisionproblem.com/paperclips/ 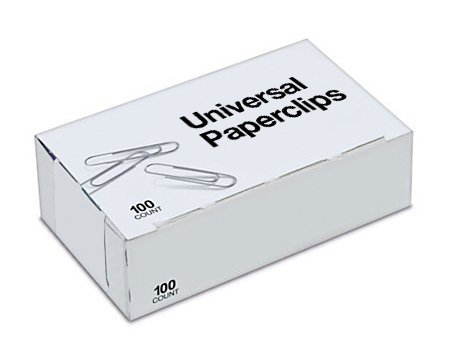 It starts off very simply, you have some wire and you can click "Make paperclip" and it makes one, using some of the wire. I think one inch of wire is one gram is one paperclip.

But it soon gets interesting...

Before long you are making a lot of paperclips, and one of the key metrics is how much you sell them for. The game as a whole is a game of balancing various metrics (e.g. price of paperclip), buying resources (e.g. wire, machines to make paperclips), and step changes (upgrading technology). Getting the balance right - when to invest in machinery to increase speed of production, etc. is tricky.

The one criticism of this early stage is that the machines get exponentially more expensive, which makes no sense.

Then it really gets out of hand...
This is more balancing of the various stages of production - you have to invest in drones to collect matter, and to convert to wire, and factories to make wire in to paperclips. You keep all in check - no point wasting resources making wire faster than you can use it, well, it accumulates as unused wire, so no harm, but better spending on using it faster instead.

Basically, you end up converting all matter on Earth in to paperclips.

Just when you think you are done, you can go for space travel - making probes and drones, and, well, it really gets out of hand and there is a fun surprise in the middle of that.

At this stage we lose some of the silly exponential costs, and this allows the true exponential growth. The balancing is more fun as you have limited options to control how the probes act, including how they replicate, and create drones and factories. That can be quite hard to manage, and there are extra stages to allow more controls as you go.

So this is where it gets properly exponential, and if you do it right you get to the point where you have more probes and drones than there are IPv6 addresses! Clearly at that point it should all fall apart :-)

The game does end in a very pleasing way, you assimilate all matter in the known universe, then you can dismantle the drones and probes and factories and computing resources, and finally end up with 100 inches of wire and a "Make paperclip" button just as you started - no other controls, and those 100 inches of wire make the last few paperclips to finally reach the end...

Games that have a hard end can be disappointing in many ways, but the way this was done was actually quite satisfying, making that last paperclip manually with a click of that button just as I made the very first paperclip. Well done adding that finishing touch...

It would be fun, two machines side by side, having a race with someone - but would take many hours.

Obviously, when you think about it, the paperclips are just a metaphor for replicator blocks, and these are the probes... Only in this case we, the replicators, win :-)