As I mentioned, I recreated a classic scene from an episode of Atlantis involving playing cards, but I have been thinking these could sell. Another good one for the Amazon experiment maybe.

Sadly, the first step is confirming if I need any sort of licence from MGM. It is complex as I am not using their media directly, no stills or clips, but I am using creative commons wikimedia glyphs and Alteran characters. If I don't mention "Stargate" on the product it may not even need a licence. I would rather hear that from MGM than take a chance though. Emails to MGM's licensing people are ignored, and I have tried tweeting as well. If anyone has a contact at MGM, let me know.

My main goal here is that I think these would be fun as a Stargate fan. Indeed, if selling at cost (i.e. not profit making) is one aspect of not needing a licence, I would be happy with that to be honest.

The cards I made for my amusement were a simple 52 card deck, plus 8 "jokers" that are the glyphs for dialling Atlantis from Earth. With Alteran characters for the indices. 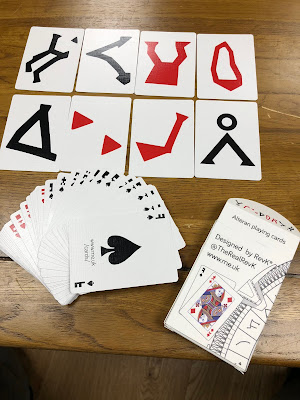 Now, if I was to make these as a deck to sell I have some ideas, and I thought I would discuss them on my blog and see what people say. How many of my readers are Stargate fans?

The main thing that is obvious is the indices (corner digits/letters) are in an Alteran font. This is quite easy to read, especially the digits. But does raise one question...

So what I do is an Alteran "T" character for "Ten". I also tried "10", and a half width digits "10", but neither looked good. One other possible value is "X" from Roman numerals which makes some sense as Alteran is meant to be the basis for Latin. However, see comments on extended decks below.

At some point in their history we know the Alterans used base 8 rather than base 10 for numbering. I am not sure if they went 8 to 10 or 10 to 8 but the current character set has digits 0-9 for base 10.

But it makes some sense that powers of two would prevail, and so I thought a deck with 16 cards per suite, making 64 cards total (or 100 in base 8) would be a nice touch.

Of course you can always remove the extra cards and play a "normal" game.

The original inspiration was the scene with cards from Atlantis where the cards dealt by Dr Elizabeth Weir are the dialling code for Atlantis from Earth (well, nearly, but that is likely a simple continuity error).

So the 8 jokers that are gate glyphs is quite neat, but why stop there. Why not all 39 glyphs?

So I am thinking a double pack of cards in one box...

It would make a nice double pack, a specialist set of playing cards. I do wonder what games you can make from the glyphs - but I am sure that would be possible.

I did have a Stargate on the back but could I do better/different? The Atlantis expedition logo? What?

What do you think?

It all depends on MGM not needing a licence though. Anyone with a clue how to contact them, let me know.

When licensing is sorted, I could have these on Amazon in a couple of weeks! 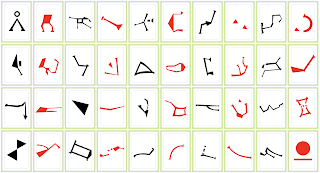