I am making progress on the new Alteran deck(s) design as per previous blog post. I am making some progress that someone on twitter says they may have a contact at MGM. We can only hope.

So first off, I have a pretty good set of glyphs. They are from wikimedia, and to be credited on the box. 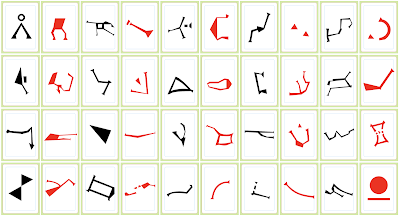 They are the orientation that matches the placement on the gate, which is not quite the same as the cards Dr Weir deals, which is a shame. I plan to do a bit more research (watching SG-1 episodes) to check these...

Now, the other sticking point is Alteran characters. There are a lot of fonts out there for this, really, I am amazed.

It is 100% clear that normal Alteran letters are a simple 3x4 block structure. No problem. Takes me back to the block graphics on a TRS-80 and even teletext graphics (both 2x3). Those were the days.

However the digits are another matter. They have a bit that sticks down in the middle. One font, and a web site, claims that the bottom row of blocks has half height left and right, like this.

This creates an odd shape for the "0" as the bottom does not match the top as a box. However, it fits the overall size nicely.

However, this does not fit the control stations in Atlantis. They are clearly 3x4 with a bit below.

These are odd, the second panel (as I noticed when first watching this) is back to front. However, this is clearly a 3x4 with an extra half pixel below the bottom middle. The "0" looks way neater. I assume the back to front digits was a production error.

Stargate Universe makes this even easier to see, with a countdown clock. 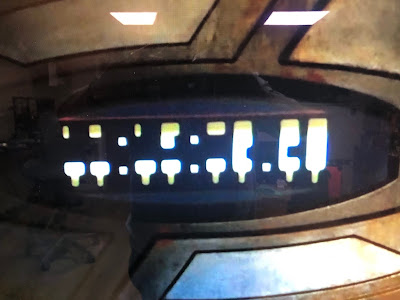 Here we see the 3x4 grid and what looks like a whole pixel below rather than half of one (making 3x5 grid) but not 100% clear to be honest from that picture, sorry. They have colon and dot which is nice and confirms the "baseline" for the font so the pip on the bottom of the digits is definitely below the baseline.

So I have decided to make my Alteran characters for playing cards use a 3x4.5 grid with the extra half pixel below much like an accent, a Cedilla if you will, only half a pixel high.

I have even designed the box, and we are ready to go once MGM confirm licensing.

So, watch this space! Or give me a contact at MGM...

BTW, the back is just the Stargate unless I have better ideas. Suggestions welcome.
at August 28, 2018