A lesson on how to piss off a fan!

As I said, I am going to a Stargate event next month. Cal Mah....

I purchased the good tickets :- 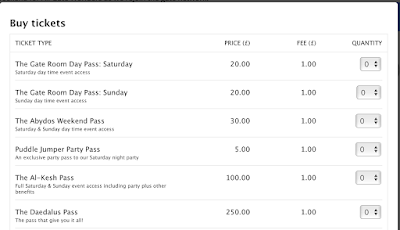 Yes, the expensive Daedalus pass "the pass that give you it all".

But oddly I found there was an "Ascension pass" that is better, and covers a special MGM event on the Sunday. Odd, as I have a pass that "give [sic] you it all"? 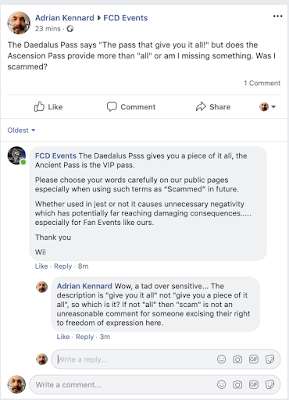 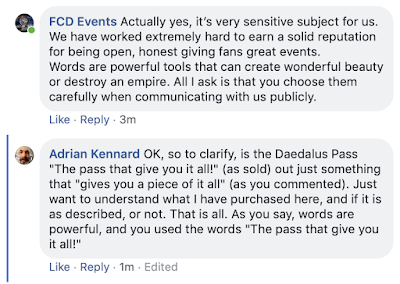 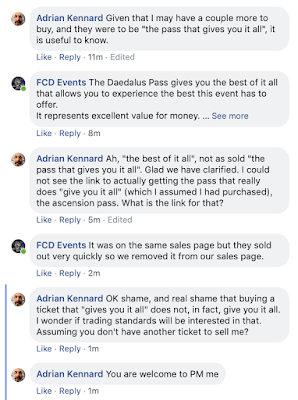 That is the way to deal with me, obviously. Oh and...

If I was mis-sold, so were many others. And by blocking me I have to seriously consider taking this to ASA and Trading Standards now. It started as a fun poke at them, but now is getting a tad more serious.

How many more have been mis-sold "the pass that give it all" not actually getting it "all" I wonder?

P.S. Reported to trading standards now - could have been avoided by talking to me and not blocking me.

P.P.S I think this is  first for me - blocked on facebook or twitter. Obviously, on both I have altar egos that can post and read and comment, and have done so, which just shows the stupidity of doing so.

Update: They have now posted an explanation (and unblocked me)...


We have found were the confusion lies.
We had a pass on sale called the Destiny Pass, this Pass was also available on a payment plan. Which at the time we issued these passes, it was correct It did “give you it all” When they sold out we removed it from sale but had to put it back on our ticket sales site to allow people who were on the payment plan to continue to make payments.
What we had not realised was when we updated the sales desk the information didn’t transfer correctly to the newly created Daedalus Pass.
These Daedalus did sell out so we again removed them from sale, however when people did not keep up their payments a certain amount where put back on sale with the correct information.
We humbly apologise for the confusion and hope that this explains the situation to your satisfaction.
Please feel free to message us if you wish to discuss this further.

And now the description has changed, after I purchased the ticket. Kind of admitting I was mis-sold...

Email ThisBlogThis!Share to TwitterShare to FacebookShare to Pinterest
Labels: STARGATE