As I blogged (here) I have a new conservatory. Some have asked why we went for Anglian windows, mainly because they are expensive. Well, I'm married and sometimes I do as I am told by my wife, but to be fair, the actual windows looked good (pictures, samples, etc). I cannot really comment on the quality beyond that as I am no expert, and the real proof will be what happens over the next few years, but fingers crossed. I can say, apart from the missing pane of glass, the result does look good, and is a lot nicer than our old one.

I can comment on the salesman. He was annoyingly pushy. The price is hiked and then vague discounts applied to get it to just being really expensive instead of insanely so. He really did not like that I said initially "not now" - it was just before I went on a holiday, and I was not sure if I could afford it yet - they were calling lots even though we specifically said what date to come back. He did not like that I wanted to just pay for it rather than taking their credit. I really hate having debts hanging over me (after various experiences in my life), so as much as possible I try to pay for things or not have them - fortunately I'm in a position where that can work most of the time.

The mildly slick part was the iPad which created a pretty accurate 3D image of the conservatory as it would actually be - colours of everything, right size, everything. Some weeks later a proper survey was done, and we were sent drawings. All good.

I was pretty unhappy with communications from them - they called after 5pm Friday to say they would come on Monday. They could have booked a date weeks in advance, but no, we are just told the day with no notice. That was hassle.

As I said, it ended up with bits missing and delays, but by the end of the week we had most of a conservatory except one pane of glass. 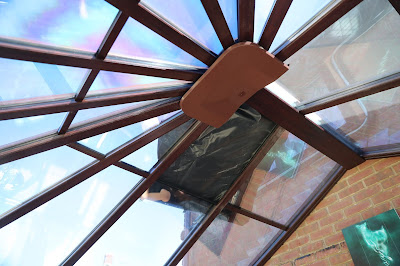 Mistakes happen. I run a company, and I know things can, and do, go wrong. Personally, I take things seriously and always aim to fix things, not just for the mistake but to stop the same mistakes in future.  If anyone has a problem with A&A you are welcome to tell me, please. However, Anglian have a different approach it seems.

Again, very poor communications, and now several times, a few weeks apart each time, they have come out with the wrong pane of glass. How can this happen? Well, mistakes happen I guess! How can it happen two or three times? How can they have no process to expedite making the new pane of glass and not take weeks?

Well, I do try to be reasonable, really. They had chance to fix this - which is only fair - but after a while I ended up giving them an ultimatum - end of Sep or it gets to be a sponsored tweet.

That did nothing to get them to actually fix it, or even try to fix it quickly, which was a surprise. Well, I don't like making threats that I don't follow through...


SO, @AnglianHome @AnglianHelp as you have not fixed the window I have a paid tweet to anyone interested in home improvement, conservatories, double glazing, showing how bad you are. Please remember, you asked me to post on social media when I ordered. pic.twitter.com/erNql3EkOl
— RevK® (@TheRealRevK) 1 October 2018


Now some may think that is somewhat mean, I guess. As I say, I gave them plenty of time to avoid it. But the real irony here is that the salesman gave one of the vague discounts in return for my agreeing to post on social media - so they literally asked for this!

I only paid twitter £100, which is almost used up now, but so far it is around 60,000 views, and 40 new followers as a result. Many people saying they won't now buy from Anglian. One that had a quote from them but is now cancelling that. I am also quite relieved that the comments I am getting are largely "good on you" / "well done", and people impressed that I am putting my own money in to making people aware of this. To be fair, if people were calling me an arse, I would have stopped the promotion, but they are not - this is nice as I do not always gauge how people will react to something like this (yeh, really, sorry).

Of course, there will have to be a next step. I plan to wait for one more wrong pane of glass before we get to the legal notice stage.

What puzzled me is that they really seem not to care. In some ways it is like dealing with large companies like BT that seem to lack the concept of "expedite the fix if we screwed up" even though they have (paid) expedite processes. Why can Anglian not make the right pane of glass in a day? Why can they not make the right pane of glass? It really is amazingly crap customer service.

I hope what I did has been a useful service to people considering double glassing, conservatories, etc. 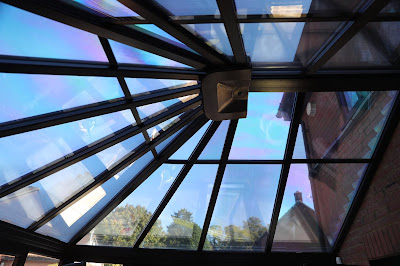