I have had my new CO₂ meter for a couple of days now, and using it actually requires a bit more understanding than I expected. So here is what I have worked out so far...

First off, what the levels mean!

The tweet I posted listed 1000 ppm as an "acceptable" maximum, and 1400 ppm as "impaired decision making". The 1000 ppm comes from a recommendation of a heating/aircon organisation (ASHRAE), but it seems that was a maximum for comfort and is not in their later specifications at all.

There are other places that talk of 1000 ppm as a target for comfort, and that 600 ppm over the outside level is an "acceptable" maximum (outside typically 400 ppm). I don't understand why the reference to outside matters - one comment is we get acclimatised, but if that is the case then my spending all my time inside (well I used to) would acclimatise me to a much higher level.

Interestingly, the hand-held meter I have has a "calibration zero" feature which involves it being outside for half an hour but what it does is set that as 400 ppm exactly. This makes no sense to me, as calibration needs a known reference and I have measured outside from 430 ppm to 560 ppm at different times and places, so not a reliable reference.

Whilst 1000 ppm may just be for "comfort", I see no reason that I (or my staff) should not be comfortable, and indeed with the prospect of higher levels causing tiredness and impaired judgement, it seems like a perfectly sane target for me to use.

I have obtained a couple of different CO₂ meters that I can leave plugged in for me office (I had a simple temp/humidity one before). It has an interesting view on levels :-

Interestingly it has an automatic baseline calibration that sets 400 ppm as the lowest it sees over the last week. I don't understand why the meter is not accurate rather than relying on measuring my local outside CO₂ levels!

The two meters are pretty consistent, but a bit higher than the hand-held meter - none have been "calibrated" though. 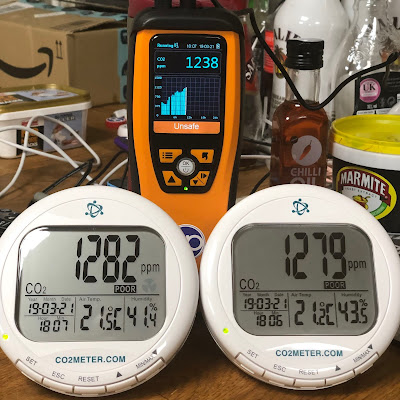 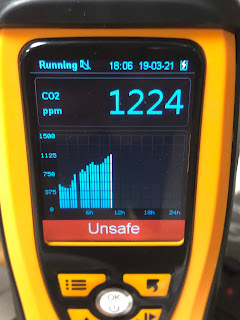 This is what really fooled me. I expected that levels would reach an equilibrium with people breathing and air flow to/from the room quite quickly, so one could measure and see what say "one person working in this 5m x 5m room" gets to. I was wrong.

It my home office today the level started shortly after 9am at 430 ppm, but with just me in here (even coming and going a bit) the level has steadily increased throughout the day reaching 1000 shortly after 2pm. It kept going! It has dips when I was out of office for a walk, and when the outside door was open for a while for a delivery, etc, but it has shown no sign of stopping yet!

This means, for example, when I checked the office and saw 1200, that could have been the result of a reasonably ventilated office with a lot of people and be like that all day, or could just be where it has got to in a poorly ventilated room at that time of day (getting way higher as the day goes on). I'll have to do a trace for the whole day to know.

What I have concluded is my office at home needs some validation. The small vents over the windows (with windows closed) are clearly not enough. My plan is getting some whole day graphs before and after to confirm how well it works, and I'll post more details.

The same is true for my bedroom - not wanting a window open to fight the air-con. I saw that the levels similarly just keep going up when in there awake. Once asleep they do slowly go down, but that was tested with only one person in the room.

I'll post more once I have more data and comparison with the fans installed.

P.S. Nice thing about my man-cave is it has two doors - open both for a minute and you remove all the excess CO₂ and back down below 500 ppm ready to start again.
Posted by RevK at 18:15:00