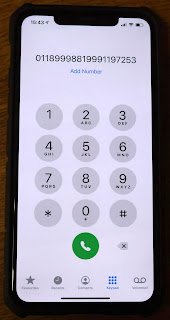 I have just issued a new alpha release of FireBrick, by popular demand, allowing some call filtering based on CLI. Basically you can do a lot more than simple anonymous call reject now. Whilst most people know the FireBrick as a firewall/router it is also a SIP VoIP PABX (phone system).

But one of the things that this highlights is the increasing need to "do something" with calls you receive. Systems like the FireBrick allow you to do all sorts on your own network, making your own "phone system" for VoIP phones. If you look at systems like asterisk the level of controls you have are quite incredible - essentially a programming language for how calls are handled and even allowing recoded messages and DTMF menus and so on.

On a private system you also have means to log things and even manage call recordings yourself.

This is all great for a "desk phone" but what about your mobile?

This is where some of the stuff we sell comes in - and we have customers doing some clever stuff. Recently we have managed to make a few improvements, but basically we have means to have a normal 07 UK mobile number, and a mobile SIM, and put your own phone system (whether FireBrick, or asterisk, or anything else) in the middle.

This means you can have a mobile phone with a SIM card, and do things like log, or filter, or record calls, and texts, either way. The SIP2SIM service looks like a VoIP handset has registered and connected to your phone system, but is in fact a normal Mobile telephone service (i.e. no special app on the phone). This means you can even make internal calls on your phone system from your mobile. (The mobile leg does have call costs even for these).

The texts can be passed by email or using http/https on your own server where you can do things with them. The latest improvements mean much better handling of unicode characters as well. You can also handle the texts from the mobile. You could just join the dots to make texts or calls, in and out, like a normal mobile, or you could do much more with your own scripts on the way.

We have people doing things like opening doors using calls, and clever tricks with texts.

Obviously we also have services that simply link calls, or texts, or both, in and out between an 07 mobile number and the SIP2SIM service without needing your own phone system. We have options like call recording and logging. But we are happy for you to make your own systems, as simple or as complex, as you wish in the middle.

Of course this also allows mobile on a normal landline style number, but texting to such numbers remains a challenge in the UK, and a lot of companies and web sites will refuse to even try texting what they think is a landline number. So using a normal 07 mobile number does the trick nicely.

We can even port in an 07 mobile number to the service, and if you don't like it, port back out again. No minimum term on the SIP2SIM or VoIP services.

So if you are techie, but want a lot more control of your mobile phone service, it is worth taking a look.

One little trick I do a lot is steal a call, transferring it between my mobile and my desk phone mid call, without the other party even realising I have done it. E.g. answer on mobile, walk to desk, put on headset, switch call to desk phone and work on computer while on the call. All seamless.