There is a famous story of the Van Halen concert contract requiring the removal of some M&Ms. It is a test to confirm that the contract had been read properly. Clever idea. More on that at snopes.

However, I first encountered it from a friend who referred to it as "The blue M&M test" and explained the story, which I indeed thought was clever.

But there is a problem! As you can see from the Snopes article, the actual story is that they banned brown M&Ms, not blue ones.

So where did this come from? Well, my friend is adamant he always heard it as blue. 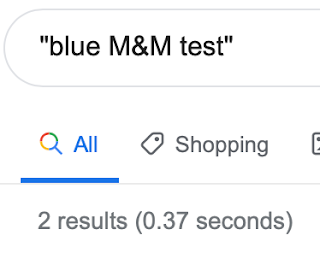 Yep, 2 results. Guess what they are? My blog!

Sounds like my friend did not read the contract properly, and so failed the test :-)