Apparently for selling (or even renting out) a house you need an Energy performance certificate. 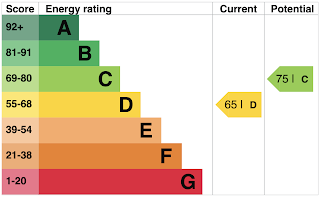 It seems to me that this is a well meaning, but totally pointless, rule.

I have berated the fact that so much of the needed paperwork is not prepared before selling, but this is one of the few things that is expected, yet not actually any use. The world is mad some times.

Does anyone read them?

Even the guy doing the report agreed nobody reads them. Even if they do, do they actually take this in to account in a house purchase decision? We are "average", so err, fine.. I guess.

This is the main bit that bugs me. As I say, nobody reads them, but our house is rated "D" which is average, but then has recommendations and details of CO₂ production.

Except the report is wrong. It says, for example, we do not have any insulation under the floor. Well, I know we do, and even provided pictures for the assessor. However, he checked, as as he is unable to report the thickness he has to report that there is none, and even recommend some is installed! So the report is factually wrong.

Also, the house has 5 air-con units - these are air source heat pumps which are efficient for heating. The report does not cover this at all, only listing the gas central heating. I have not even bothered to ask why - given that we are "average" and "nobody reads these anyway". Oddly, installing heat pumps is not one of the recommendations.

But, as nobody reads them, what do I care? I have one, so it goes with the house sale paperwork. Total waste of time.

P.S. One of the factors (in this 10 year life certificate) is if low energy light bulbs are (currently) fitted. How the hell is the choice of light bulb fitted at the time of the assessment a factor in the energy efficiency of the house as a whole. At best it should be "has standard light fittings allowing low energy light bulbs to be fitted", which is like every house.

P.P.S. It occurred to me - what if I had removed any non-low-energy light bulbs when he did the survey, would that have made us 100% low energy and a better rating. After all you don't get lower energy than no light bulb fitted!