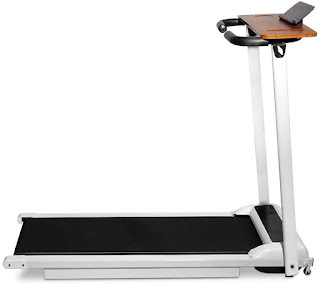 I think, personally, that many sites (like eBay, sorry) have a reputation for "iffy" things being sold. I think this is mainly because they are primarily a platform for third party sellers who can easily be "iffy". I may be wrong, that is just my personal opinion / perception. I generally avoid eBay, but when I do buy I try to check what I have got very carefully.

Until now I thought Amazon were better. Even more so, when an item is sold by Amazon and not a third party through Amazon. That was until I bought this treadmill (I'm not going to link to it).

I unpacked, plugged in, and it seems to work fine. Yay.

But then I noticed the plug was rather odd, and on checking I find it is dangerous and illegal.

So, I contacted Amazon. They initially suggested a postage label, but when I explained I was not happy to pay postage to return, and had discarded the packaging already, they arranged a collection for this week. Only once collected will they refund, apparently.

Now, you would expect Amazon to stop listing the item, but no. Their reaction is to put it on offer!

I posted a review with a picture of the plug saying it may be illegal, and they even approved my review and published it! To be clear this is "Dispatched from and sold by Amazon." so Amazon are now knowingly selling a dangerous and illegal item.

So what's wrong? Most obviously the plug... 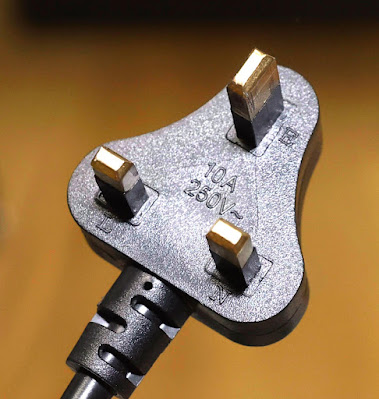 I checked a bit more, and surprisingly the actual lead is not made of wet string, it is 0.3Ω end to end and does not get warm at the 1.5A running load. I did not actually strip out to measure the conductor size, but the resistance and temperature checks are encouraging. The Earth is connected, and in a test socket it did stay connected when plugged right in, surprisingly. 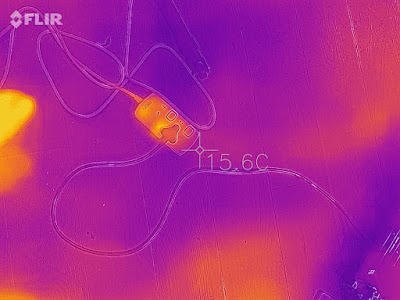 So the plug is a bad sign, but what is worse is Amazon's reaction to this is to simply put it on sale, not to withdraw it from sale! Not even to put a hold on sales until they check. More sort of "quick, sell the stock while we can".

Surely Amazon should have a process when stocking items to check for a CE or UKCA mark on the product. Surely this would especially apply where they are the seller, not some third party, so they are on the hook for the illegality of putting on the market in the UK. I know there can be some fake products with fake CE/UKCA marks, and if that was the case I would have sympathy for Amazon - but Amazon stocked this item without checking something as basic as looking for a CE mark, or checking for BS1363/kite mark on the plug. How is that not STANDARD PRACTICE for Amazon when stocking any item?

So, unfortunately, I now have to say beware of Amazon!

P.S. I tried reporting to Trading Standards and was told I would have to talk to Citizen's Advice, who have not replied. Why is this not simply a matter for the police?

P.P.S. Amazon seemed to have pulled the listing, finally.