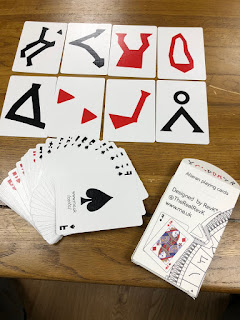 There are fans of all sorts of TV shows and films, obviously, but it struck me there are some very different types of fans out there.

You may have guessed I like Stargate. I have watched it lots of times (SG-1, Atlantis, and Universe). It is very good as "background TV" for when I am doing something else. Yes, there are some serious plot holes like any show, and some massive tech inconsistencies even allowing for it being sci-fi with its own set of science rules. But it is fun, and entertaining.

I did try to make some Stargate playing cards, but sadly the licensing is basically impossible.

But in my case, being a fan is more of "I liked the episode when they went back to 1969", and if I hear the first few seconds of an episode I could tell you exactly what happens because I have watched them so often. No, I cannot name every actor and actress or say every other film or show they have ever been in.

My brother, on the other hand, is very much a different sort of fan of these things, and not just relating to Stargate.

He is far more "They filmed effects in 16:9, but when the released a DVD in Germany (which was made for UK as all in English) they used scaled up 4:3 effects for some reason", and frankly spouts every pointless bit of shit like that! (I am paraphrasing, I was not really listening).

Which sort of fan are you?