Three weeks in Wales now, and it has been fun. I have felt very much in limbo still - much like when we were trying to get the purchase sorted. It makes it very difficult to get much work, or anything else, done, but I really feel the limbo is coming to an end and normality resuming (as much as lockdown can allow). The fibre being in and working is a turning point as well.

That said, there are a number of jobs still to do, and we have to sell the old house. It is finally ready, and needed a lot more work than we expected. It looks really good, so should be on the market next week.

We have been finding more and more little things that suggest the previous owners finished things in a rush somehow, or possibly just ran out of money. It is weird, but daft things like the tap fittings not tightened up, so one came off (thankfully we managed to sort before water everywhere - well done James with finger-in-dyke style shouting for help). We have tightened the toilet seats. We have done loads of little things we did not expect, as well as the larger things we did (like utility room, and my office, and so on).

Sadly the drive was a challenge - a very nice new driveway (basically, the whole house as been re-done very nicely apart from these minor niggles). But it ends on the existing tarmac out to the pavement, and creates a sharp hump. The removal van bottomed out and could not come in to the drive all the way, and it does not agree with James's Tesla - for some reason he wants to keep his battery pack intact! So, new driveway outside was one expense we did not expect, but nicely done. To our surprise the cables for the electric gates were not exactly what you would call "buried" - yet another small "detail". They are now. 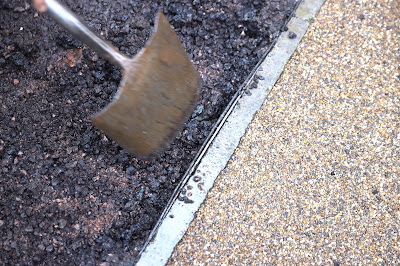 We had it raised quite a lot as you can see by how much they raised the water cover. Now the Tesla can get over it cleanly... Looks nice. 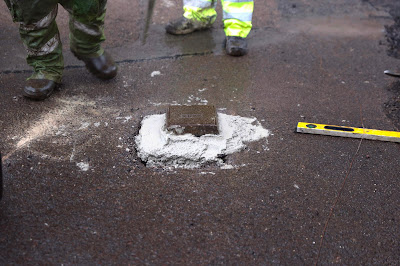 I have also convinced my wife that my teletype is like her suit of armour, something to have on display in the hall. It still plays "Adventure" game on demand, and connects to the WiFi allowing it to be texted. I even got a birthday text on my teletype from someone :-) 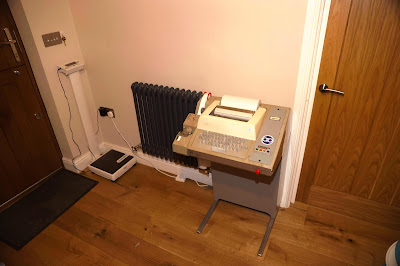 I had been wary of unpacking it - and was pleasantly surprised to find it all in one piece and working. It now prints the guest wifi password of the day every morning :-)

P.S. Yes, the scales are now linked to print your weight on the teletype - thanks for the suggestion :-)

I am finding Abergavenny really convenient - everything so handy and just easy to walk to. Yes, I have sort of turned from an M&S snob to an Aldi middle aisle browser. Well, maybe not quite that far...

Where do I now live?

I'd post a lot more pictures, but it is an odd situation to be honest. With my last house we had lived there long enough that things like director's home addresses in Companies House was normal, and expected, unless you had a good excuse. My address was, by no means, secret in any way.

But if I say what sort of place I have bought, or almost any details, it will be obvious where I live. Do I want the world to know? Does it matter? It did not matter for the last 23 years (well, one journalist turned up on my doorstep for something once). At least for now I am not telling the world, so if you have worked it out perhaps don't post your conclusions just yet. It's annoying as it is a house with some character, and a shame to keep quiet in many ways.

Even so, I am feeling at home, and looking forward to life in Wales...