My soldering is not bad, but there are limits, and I am reaching them with the smaller and smaller components I am trying to use. Not only are the pins small, they are under the chip. A small QFN is just about doable. So I wanted to up my skills in soldering and try solder paste. I'm impressed with the result, but it was a bit of a journey.

How to do it? Get an oven, get a proper solder stencil, and get the right solder paste. You can then wipe the paste through the stencil with a plastic card, apply components and cook. It works! 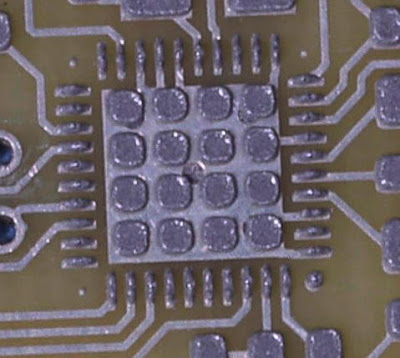 So what was so hard?

Well, it was not as simple as it sounds, so here is what happened.

I decided to try and make a stencil myself. Basically, having a proper metal stencil made adds another £50 to the cost, and someone said they had success with a vinyl cutter. I decided to try a laser. I got a cheap one off Amazon (K4 laser generic Chinese thing). Sadly the firmware simply will not laser cut, it only raster images. It looks like I could dismantle it and re-flash with something sane, but a lot of work. 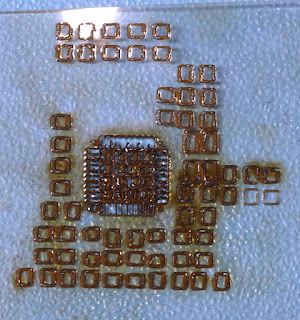 So I ordered a better laser, one that actually claims to do GRBL. Again from Amazon. The GRBL firmware loader is a windows program but works from parallels, and then it just works nicely with LaserWeb on my Mac. I'm amazed at what you can get.

So I tried some actual vinyl, and that worked surprisingly well, but is just not quite accurate enough - rough edges. It would be fine for 0603 but not QFNs. Bugger.

Oh, and all of them made some nasty smells - this is why a cheap laser is not ideal - no fans. Recommend using outside!

Next I tried an actual vinyl cutter, as someone else had managed this. How hard could it be. I decided to try and do a bit more research, and there are some nice small cutters like Cricut and Silhouette. However I see Cricut recently stopped you cutting your own designs!!! You have to pay for designs. Wow. And I could not work out what you needed for Silhouette to work. So I went for a more generic cutter/plotter that does HPGL. Using Inkcut on my Mac worked, I can cut things...

But, not quite. For a start it took a bit to work out it uses XON/XOFF. Then I found when the serial port closes at the end of the job the printer aborts and so does not finish the job (I added a delay to fix that).

It could not cope with mylar or acetate, but did cut vinyl. However, it did not make a clean stencil! The pads were not closed and the fine pads were just a diagonal line!

The answer is that I did not quite do enough research. This is a "drag blade" cutter, so the blade point drags 0.25mm behind. This would be fine(ish) for cutting large sticky back lettering, but now when the features you are cutting are not even 0.25mm wide! There are, apparently, some s/w work arounds I could try. But for now I have given up and decided to do it properly...

Update: It looks like the Silhouette printers are going to work. Seems you have to pay £50 more for being able to load an SVG, but it will load a DXF anyway. Converting SVG to DXF is easy with inkscape and free, so why would you pay £50 more. That said, I am not sure it can cope with such detail.

Use a proper stencil?

So I ordered a proper stencil - very nice. PCB Train do a good job. 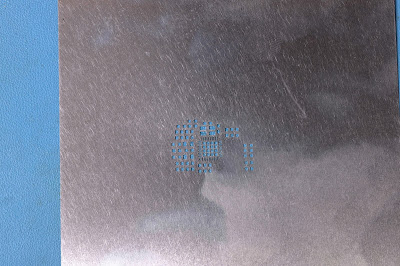 I ordered some solder paste from RS, and, well, it was a disaster. It was runny and far too much solder paste, and well, useless! 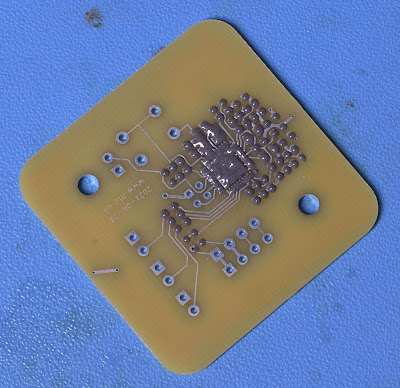 I was desparing, but encouraged by people on twitter who clearly managed to do this right, I carried on. I ordered some different solder paste, just in case.

It worked first time, clean, nice, easy to use. I am impressed. 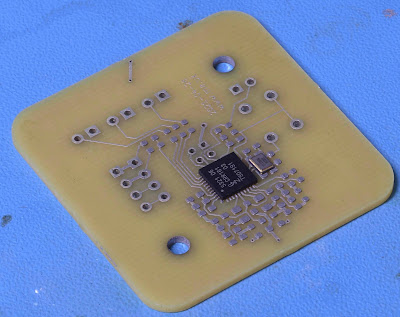 The first board made like this actually worked - well minor issue with reset, but did then work. So now to try another. 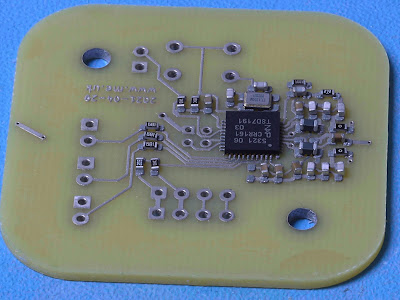 I failed to get anything to make my own stencils, but the ones from PCB Train are impressive. One trick is they charge the same for stencils up to a certain size, so I'll be adding a number of boards that I think I have finished and ready to the artwork for next stencil order anyway. If they are the same when I order the actual boards, great,  I have a stencil already. If not, then it has not cost me to do this, but it is an incentive not to move any components if I do have further changes at all before ordering.