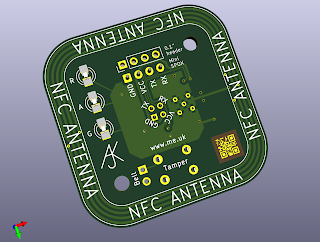 As you will have read, I decided to trying and tackle making an NFC reader. It is my first project in any sort of RF, so a massive learning project, but also a first in terms of trying to fit small components (e.g. QFN-40) on a PCB. The QFN-16 for the FT230X was just about doable with a soldering iron, but now I am in to solder paste and re-flow oven territory (more on a later blog).

I decided to give it a go, and made an NFC board, and to my (quite frankly) shock, it worked! It worked well, in fact - seemingly at least as well as the Elechouse board. I have made some tweaks with smaller components, and that also worked. Designing a PCB can be like a never ending piece of art - always one more small tweak or improvement. I am now working on a 3rd version, with even smaller components, but this time I am starting to do it properly from am RF point of view. Instead of just drawing an antenna track and hoping (which worked, to be fair), I now have an "network vector analyser" to tell me how the antenna and tuning circuit works. 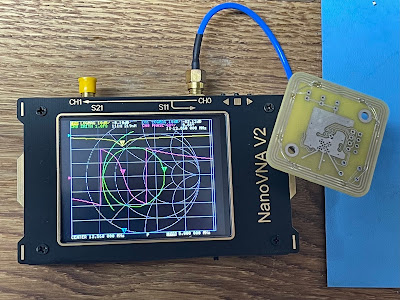 The trick is to test the antenna and make component changes, or even adjust the antenna design. Apparently all sorts of things impact the tuning including any components near it, or just bits of copper track, and so on, even the case (even if plastic). But using one of these gadgets it is possible to work out if you have the tuning right, or close, and make adjustments. I am still learning, but getting there. In that image, you can see I changed the loop length a bit, and as expected the centre frequency moved.

My plan is to have a good quality, tuned, working, NFC reader design (open sourced), that I can sell. Something that is better than the standard Elechouse boards everyone uses. Apart from better RF (well, better than all the cheap copies of the Elechouse) it has red/amber/green LED and tamper switch. This makes it perfect for any sort of access control entry reader. I'm not really expecting to make much money, but would be nice to cover the costs of getting this far and learning this stuff.

I expect to make up a few of a final design, maybe next week, and offer some (free) to people like hackspaces to have a play and give me feedback. Obviously, if they are hit, I could have hundreds properly made and sell them. But this whole project was more aimed at a learning exercise in the first place, so covering my costs would be a huge win.

It almost makes me a proper RF engineer, LOL!