I have now had one cloudy day, and one much more sunny day. This is April 14th and 15th. Bearing in mind that the forecast from the installer was an average of 24.28kWh/day over the year. I expect winter to be much lower, obviously. 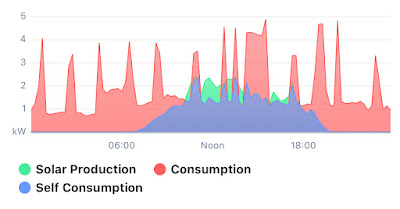 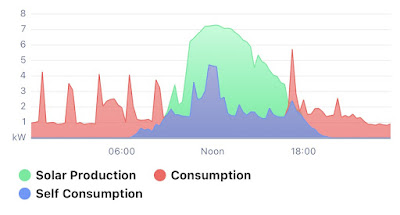 P.S. After a few days I can see we are typically doing 40kWh to 50kWh most days, the low cloudy day seems to be very much the exception.

What does that mean?

It looks very much like the forecast is, as expected, somewhat pessimistic and I can expect much higher. The 40 and 50kWh days in April suggests we will easily exceed the forecast for the year.

The sunny day is interesting - we made more from solar than we used, even in April. I can't be sure how usage will go over the summer - I expect it to drop noticeably as the heated kitchen floor used a lot in the winter, but also we now have air-con. The air-con is quite low usage at present, but when it is really hot and sunny it will be using more. The good news is those days will have more solar.

It really does highlight the need for the battery (which is on order). With a battery I could have had all of yesterday's power from solar and imported none. That is, quite frankly, amazing.

I have also changed the hot tub, as one of the really high users of power, to heat during the daytime when we have spare solar rather than maintaining temperature all day and night. Especially without the battery - that alone will save £'s a day.