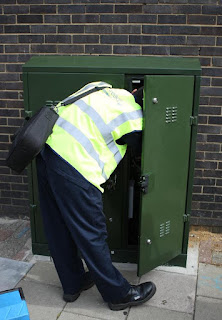 Once again there are calls to change the way "broadband" is advertised [ispreview], describing it as misleading.

I have said this before, but once again I'll try and explain why the proposals make no sense. It was rather telling that 10% of people surveyed were happy with the current system. The current system involves lying about the technology, claiming it can only achieve a maximum speed that is a speed 10% of people could get, e.g. 76Mb/s. instead of 80Mb/s That means 10% of people will get more than that maximum and so have been lied to about it being the maximum. It means that if people feel misled by "up to 80Mb/s" now you have 90% of those people still feeling misled by "up to 76Mb/s". The problem is not solved, you simply have 10% fewer complaints about being "misled".

I do wonder if a simple solution is changing "up to" to "not more than". Would people still feel misled? I bet they do somehow.

Personally I think people are not clear on the way the technology works, and that is a hard one to solve. Let's consider two technologies here that are pretty simple, and for which people may have a choice. One is ADSL to the exchange, using ADSL2+ modem standards, and this allows up to 24Mb/s sync rate on the line. The other is VDSL to the street cabinet, and this allows quite high speeds but is sold by Openreach in a package with an 80Mb/s sync limit, so up to 80Mb/s sync rate on the line.

If you have a choice of "ADSL or VDSL" they are technical terms and the average consumer has no clue.

If you have a choice of "up to 24Mb/s" or "up to 80Mb/s" you can guess which is better and have some rough idea of the scale of "betterness" that may apply. Note that actually, it is possible, for long lines to get better speed on ADSL than VDSL in a few cases, but that should be clear when actually ordering. The key here is that the different technologies can be simply compared. Indeed, a 330Mb/s FTTP service is clearly "better" still, where as 8Mb/s ADSL1 is "worse", and so on.

So for comparing the technologies, the "headline" speed in the "up to" claims is a perfectly sensible comparison for most consumers.

The problem then comes when people actually buy a service and find it is not, for example, 80Mb/s.

The guidelines are very clear on this and I believe most ISPs follow them. When someone orders, they are told an estimate of the speed they are likely to get where they are. If you order from A&A, and are told 25-30Mb/s you cannot really complain that you have been "misled" with "up to 80Mb/s" when you actually get a speed within that estimated range, e.g. 28Mb/s.

There are issues as the lines may not get the sync speed within the ranges we quote, that can happen. These are estimates are based on BT data which we cannot control. Nobody seems to be complaining that these estimates are wildly wrong though, which is good. That probably means we have a system that works.

So for a start I really do not understand why we are having these cries of people feeling misled in the first place. Who are these people buying a service with a specific speed range estimate and then getting upset that the speed is within that estimate but not the "headline" speed advertised?

Anyway, there are a few other problems. For a start I think people really struggle with the idea of speeds of broadband. E.g. you don't use the full speed all the time - you use a certain amount if streaming a video, or playing a game, you may use the maximum when downloading something or maybe not. I think people see that, but I think they expect that if the service is "up to 80Mb/s" that they can push it that far if and when they need, at least some of the time. People seem not to realise that the limit will be constrained by their line and location and that is not something they can generally change in anyway, and neither can the ISP.

People also don't seem to appreciate that there are a relatively small set of technologies available, and in many cases actually the same wires and modems and equipment and backhaul between different ISPs - so if one ISP sells Openeach FTTC GEA as "up to 76Mb/s" and another as "up to 74Mb/s" they will actually be buying the same thing from either, and it might be only 50Mb/s, so the comparison of arbitrary per-ISP 90th percentile is not actually helping people decide.

The other problem is people do not know what the speed actually means, if we say 25-30Mb/s and the line gets 28Mb/s, then great, but what does that 28Mb/s mean? It means that the modem to modem sync rate provides 28Mb/s throughput (downlink). It does not mean you can download a file from google at 28Mb/s. Why? Well, a lot of reasons...

However, these links will always be shared. To make them un-contended so that they can never fill up would mean costs rising by factors of many hundreds. It would make the broadband service ridiculously expensive, and would not eliminate all of the other aspects where the network is shared. There simply is no point. In practice ISPs do vary, and have different policies, but these are not something addressed by the ASA in any way or published by ISPs. At A&A we aim to keep links to carriers un-congested, i.e. we have enough capacity, but this is no guarantee that usage won't suddenly exceed it on occasion. Some ISPs run their networks so they hit limits when busy every day.

Ultimately what you are buying is a access (at a modem to modem access speed) to a shared global network, most of which is totally outside your ISPs control.

P.S. A&A have announced that Home::1 BT back haul FTTC will be one price now, dropping the extra £5 charge for the 80/20 option (from next bill). This brings the pricing in line with the TT back haul FTTC products. Yes, this means the same price whether the sync is 8M or 80M.
Posted by RevK at 08:24:00