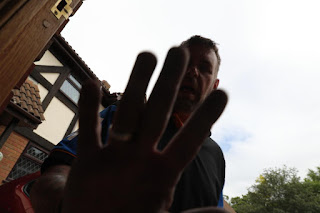 This is just first impressions. I have just had Sky Q installed.

First, yes, I am using Sky. Personally I don't think I have watched Sky for a long time, and then it was only to record and watch my own live TV appearances. Maybe before that I watched some series (well, recorded and watched later). However, my family like it. Sandra likes it. Lewis likes it. So we have it.

We used to have 7 Sky boxes in total, but some have broken over time (all of the original ones, I think), and some kids have moved out, and so on, and we were actually down to only 3, albeit all new 2TB Sky+ HD boxes. Annoying I have been paying for all 7 boxes, mainly because I did not really want to run the gauntlet of talking to Sky customer services. It comes to something when you would rather pay £40 a month more than call them! Sadly the on-line order form does not seem to have a "cease this extra room" else I would have ordered on-line.

Anyway, I saw Sky Q on the site, and there was an order button, and it will save me quite a lot. So I ordered, along with four of the Sky Q Mini boxes. They seem to have no ongoing cost, so why not.

The installation took many hours. You would expect the hard bit is fitting a new dish and running cables, but actually that was quick. I had a pole for the old dish, and existing cabling I could patch through bypassing the distribution amp. It uses two cables for wide band Horizontal and Vertical, so is different to old Sky boxes. What took so long was the set up, s/w upgrade, and so on. That literally took hours, and they got another guy in to help.

Even then, they did not actually set up as I asked, but managed to bodge it together.

The first annoyance is that the whole system seems to rely on use of WiFi. It uses a WPS system to connect one box to the next. Each box appears to also work as an AP itself with a different SSID. You can even have one box daisy chained of another it seems. I now have 5 new SSIDs visible locally - that is a pain.

There is an option to "connect to your broadband router via wired network". I set that up, but it still seems to have the WiFi and all the SSIDs still. It looks a lot like this just sets up the "client" side to be wired, but the device still works as an AP to any other boxes if you need. I cannot see how to turn that off and just use the LAN.

Update: You can turn off the WiFi! Go in to home menu, scroll to "Settings" but do not select it, then 0, 0, 1, and select, and that is installer menu where wifi can be turned off (2.4GHz and 5GHz separately). It also has the power line stuff which is definitely switched off!

Then we come to one of the key problems, which they seem to think will change in future. It seems you can only have two of the Sky Q Mini boxes operating at a time. The others just tell you there are too many in use and to put one in standby. This is very odd given that they say you can have up to 4 of them. If limited to two working, why is there a limit on how many on the network anyway?

This is what is really annoying me now.

They stated clearly that whilst live TV can only be viewed on three boxes (did not say it was main box plus two minis, just "three boxes"), but they then said categorically that catch-up/recorded/on-demand can be watched on the other boxes.

That seems to be a lie - listen for yourself...