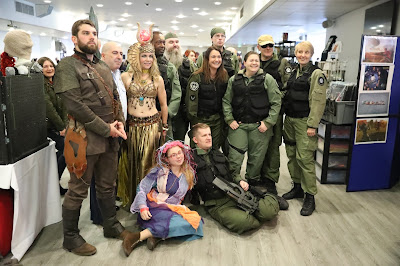 As for the event organisation, obviously I'm not impressed with my ticket being cancelled. It was three weeks after the "misunderstanding" on Facebook and with no warning. It was after I had spent money on a hotel room which he refused to cover. I still don't know who is actually running the event though - "FCD Events presents Cal Mah" does not explain the legal entity involved at all. I saw no terms and conditions as part of buying tickets, and the receipt from PayPal says it was paid to the organiser personally. It seems no data protection registration that I can find, and not complying with PECR (he emailed trying to sell more tickets using the email I used to buy the ticket, with no opt-in having been requested). No accessible privacy policy (just a generic contact link). I'm rather concerned that it is pitched as a charity, which has a whole set of rules of its own. Lots of rules (and laws) broken, or so it seems to me. In the end I decided to go, and not waste the hotel booking for which I would have no doubt had to sue to get my money from the organiser. It really was not the way to treat a fan (or a customer)! Had it gone better, not only would it have been a couple of expensive tickets but could have been a stand at the next event, etc. I am far happier being involved in events than just going to them. I could certainly have informally helped him with meeting some of the legislation! Oh well.
at November 19, 2018