SVG all the things!

I am quite amazed how many things in the business are postscript based, i.e. code or scripts generating postscript, or just hand crafted postscript files, which are then converted to PDF or printed.

I have been working all week on this, not just the plastic card printing, but now the invoices and statements and letters from the accounts system. Because of my new library for fonts I have also been updating systems that were already SVG based but coped badly with long names and strings.

But there is still a lot to do, so this is not going to happen over night.

The main change now for invoicing is the system generates SVG files. I originally planned on making simple multiple page SVG using inkscape style "layers" but actually inkscape is slow to load a multiple page SVG anyway even though it can pick out one page to convert to PDF. SVG does not (yet) have pages as a concept, but that may happen soon. Sadly I cannot seem to easily script loading once and then converting each page, so I ended up making multiple SVG files. But I have the option to make one SVG file, and I may make one that is interactive with page turn buttons, for use in a web page as well.

As has been a big topic on my blog, of late, fonts have been the challenge. I am getting the hang of it now. Latest annoyance if font family names - where some fonts have one family name and many weights and slants and so on, but others make each combination a different family name. I have ended up with code to "normalise" this (including, in one case, removing a trailing space from a family name which refused to work in the browser even in quotes!).

It also took me a while to realise that SVG font-style is *just* the slant (normal, italic, oblique), and also that SVG font-weight is 100-900 but free type uses a totally different scale. Oh, and it is normal, not "normal" when using in a style, but always "normal" when used as an XML attribute (obviously).

Anyway, finally we have a system which uses SVG masters as a letterhead and template for the content of invoices, statements and letters. This allows a lot of fine tuning (the accounts system is used by a lot of different companies). The old system using postscript allowed even more fine tuning but only if you could code postscript. This way you can edit a letterhead or layout in inkscape, which is a lot easier.

I have even set up a system to allow font control at various levels, even per account. This means we could set up an account for large print, for example. There are limits on what will fit with invoices and statements, but we can make text much larger in most cases, and text on letters even larger. We can also control font, such as using the Open Dyslexic font, if wanted. Whilst I doubt we would get many requests, especially as such documents are almost always emailed and so easily scaled on screen, we have the option now.

The other good thing is the new PDFs have much better copy/paste of content including good unicode support. I expect this would help screen readers extract text more easily.

Whilst mostly the plan was to make an equivalent system for invoices, statements, and letters, I have taken the chance to improve some things - such as a summary and totals on page 1 of invoices when they do not fit on one page.

Right now, some customers are on new format, so we can get some feedback, but we'll switch over completely soon. The "formal" invoice remains the PGP signed plain text that is emailed, but the PDF and print versions should be much nicer now.

Even so, much more to do - things like the call data records need changing and improving. This is a bit of a never ending task.

And finally, I have to say how excellent Google Fonts is. I have not loaded them all, but so far a reasonable selection can be seen on the card printing system, which I have managed to group by the base font family name. I'm happy to load any more free fonts if people have requests. 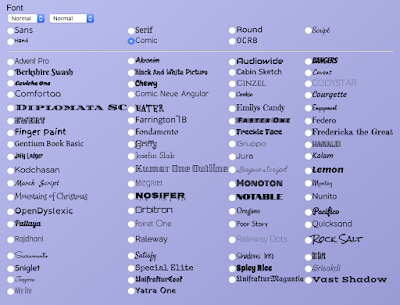 Thanks for the help from those that have been testing, especially Neil for his pedantry.

P.S. This seems odd in a way, laying out letters, as one of the very first projects I ever coded was a text editor and formatter for a TRS-80 written in Z80 code and printing to a daisy wheel printer over a Centronics interface. How time flies...
at November 11, 2018