I saw an interesting report that a few people in a conference room can quickly result in CO₂ levels such that there is impaired decision making. Wow.

This is crazy. Study shoes three people in a conference room over 2 hours can result in a Co2 level that can impair cognitive functioning. Ie. If you’re making decisions at the end of the meeting, you’re mentally less qualified to do so. pic.twitter.com/yGdufCWoVF
— Chris Young 🇨🇦 (@netmanchris) 16 March 2019


So I thought, I wonder what CO₂ levels I work in normally.

Of course a good start is understanding what CO₂ levels are sensible. Wikipedia has some answers. It seems below 1000 ppm is acceptable, but there safety levels set way higher than that.

I went and got a meter off Amazon (where else!). It seems to be easy to use, and gives two particulate values and a CO₂ value as well as temperature and humidity. 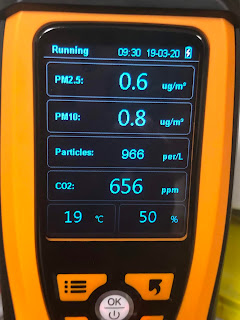 This is a small room, under 5m x 5m, with windows (that I keep closed), two doors (also closed most of the time) and no air vents as such. It has air-con which seems to filter quite well, so the day starts with this - very low particulates and sensible CO₂ well under 1000 ppm. It is only myself in the room normally though.

Once I am in here a while, CO₂ gets to over 900, but it depends what I am doing.

I have a treadmill - if I use that then the CO₂ gets over 1000 in a few minutes.

So maybe I don't need extra ventilation in here - if I open a window when using treadmill perhaps. This time of year a window is not problem but in summer or winter it is not ideal, obviously.

For reference, outside this morning varied between 520 to 560 as I walked through town to Tesco for my Costa breakfast. At Costa it was 700 ppm, and particulate levels of 3. Impressive.

Where next - well, my bedroom. I have air-conditioning in there as well, and as such do not normally have a window open. The bathroom has a window slightly open but the door to bedroom is normally closed. I was quite surprised that during the night the levels were over 1300. I suspect I do need some ventilation! I tried a window but it is behind curtains and did not result in much in the way of extra air circulation or a noticeable drop in CO₂!

I also checked the office, which was around 1200. They have a fan but normally off, so I think we can improve working conditions there. I also wonder what a plant or two would do.

Do I really need to do anything? I am thinking a bit more ventilation perhaps in some cases, maybe. In practice, I am planning to install some almost silent low power alternating external air vent/fans with heat exchangers. I'll report back on how well they work in due course.

Assuming I improve the CO₂ levels I won't be able to say if that makes any difference as no real objective way to tell without huge biases creeping in, I don't think. 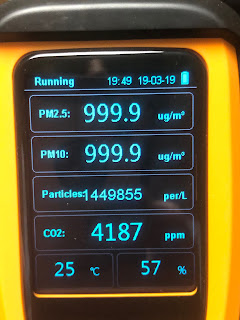 However, for one final bit of fun - I went in to the kitchen while there was much cooking (so much that shortly afterwards the smoke alarm went off), even with a couple of windows open...

That was impressive - particulate meters literally off the scale (100 is a level that is bad), and CO₂ at silly levels.