The problem is the house! Whilst old buildings with thick walls are not an issue unique to Wales, they are a problem for WiFi. The outside walls are around a metre thick, and the middle of the house has huge fire places and chimney breast making an even thicker wall. Whilst the basic layout is two rooms per floor (one front, one back), it has three stories and high ceilings.

What this means is one WiFi access point in the front room does not working the back (kitchen). Similarly WiFi on the ground floor struggles on the 2nd floor, if at all. Basically, there is no one place to put a WiFi access point (AP) that will work sensibly for the whole house, or even most of it.

This is a big problem for the traditional arrangement of ISP provided combined router and WiFi AP. Even solutions using WiFi repeaters would struggle, so the best bet is to have multiple wired in APs.

The solution, for some time, was to have several Apple Airport Express APs, around 4 of them. This is very much "on the cheap". For some reason this was not a good solution. Much of the house was not well covered, and even in the same room as an AP a speed test would rarely show more than 1Mb/s and usually the WiFi was unusable - so much so that they took to turning off WiFi on phones and tablets and using mobile data instead, in there own house!

We recently added a new package to our order forms at A&A, a "Serious WiFi" package which includes two WiFi-5 APs, a PoE switch and selection of cables and couplers. The idea is that this gives you the kit to deploy two WiFi APs in such a premises. It is far from cheap.

They finally asked me to come and sort the WiFi, and I thought this was a great chance to test this new "package" which we have started selling in a typical situation. I took the two APs, a PoE switch, and cables. The APs are Aruba IAP-305s which are "WiFi-5" (802.11ac).

The first step was to work out where to put the APs for good coverage. This was a combination of looking at the rooms and the thick walls, and also considering where the mobile devices will most commonly be used. We decided high on the wall on the ground floor at the front facing in to the house, and high on the wall in a back room, on the 1st floor facing in to the house. There are a number of other places we could have set up the APs I am sure. 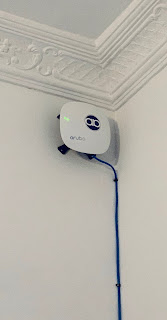 We unplugged the old APs, as the new ones do a frequency scan to decide on best channels anyway, and we used a double sided sticky pad to stick the new APs to the walls in the selected locations with a loose trailing network lead. This allowed us to test the positioning easily.

We looked at mobile signal strength and speed tests in each room, the results were good. Having decided on the position, this meant a masonry drill to fix the access points properly and cable clip the cable in place. Yes, I am not a decorator, I was only there to "make it work" - there are plans for some white trunking in the near future I gather :-)

We were quite pleased that the solution worked and did not need a third access point, which was always a possibility.

Once done, more testing, and they are over the moon with the result. Phones can seamlessly roam between the two access points. And the speed tests are somewhat better than the 1Mb/s they could manage before. 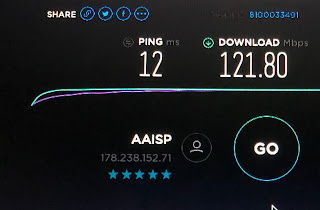 To be honest I was surprised how much difference this has made. The Apple Airports may be a bit dated, but they should basically work. Obviously the new access points have 2.4GHz, and 5GHz, and multiple radios and antenna, and newer (faster protocols), so this clearly makes a difference.

It does rather prove the worth of the new "Serious WiFi" package though, and I am pleased with the result. Expensive, but compared to "unusable" WiFi before, I suspect it was worth it - and would be well worth it for a business premises.