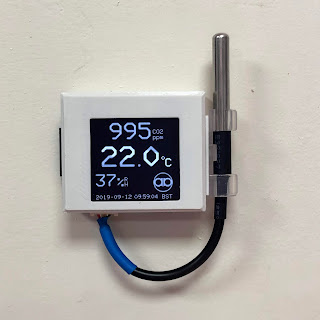 For my latest little R&D project I have made a new environmental sensor. These should help us see how good the air quality is in the office, and as usual, I have published this as an open source project for anyone else to make the same.

This proved to be a bit of a challenge, as always. I have already managed to get my head around the ESP32 and the Espressif ESP-IDF now, and have a set of  MQTT based tools as a base (here). 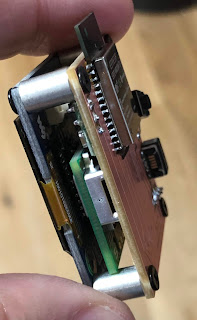 One challenge was space - I decided to make the the PCB the same size as the OLED PCB and sandwich the CO₂ sensor in between. This was definitely a challenge to get connectors to fit!

I also decided to try the Molex SPOX connectors as they seem relatively cheap and easy to use.

The other aspect which is especially challenging is power. Most of the bits I have done to date have been alarm and access control and so use 12V on screw terminals. As it happens the unit (pictured above) takes 12V which is in the wall for the door control. But for use in bedrooms I need power to these and so I went for a micro USB. This is simply because that is a really easy and readily available and cheap way to provide a device with power.

The challenge itself is that the connectors have tiny tiny 0.635mm spaced contacts, and are also mechanically crap and come off the board. I ended up getting some connectors that I could superglue to the PCB, and thankfully the power contract are the end, so even though milling and soldering at 0.635mm pitch is just about possible (surprisingly) I can avoid this by actually only soldering the end pins for power. I decided to make the 3D printed case design fit tightly around the connector as well for extra mechanical support, except that means removing from the case pulls the connector off the PCB!

There are a lot of libraries around for ESP32 and ESP-IDF already, which is nice - but perhaps not as many as for the ESP8266/Arduino based environment.

That said, these are simple enough devices, so actually I ended up doing the I₂C interface for the CO₂ monitor myself using the ESP-IDF directly.

I used a library for the DS18B20 though, and it seems they have been quite clever using the IR remote control hardware to make the one wire bus work using DMA. Impressive. I decided to use a DS18B20 as (a) it allows the thermometer to be positioned where you want, (b) it is away from the components that could get slightly warm, and (c) it seems way more accurate than the one built in to the SCD30 CO₂ sensor. However, the code is happy to use the SCD30 if you don't want to use a DS18B20. Similarly, the code is happy to work without a display, but I am quite pleased with the display, to be honest.

For the display, there is a good Adafruit GFX library, but I ended up doing it myself. The commands for the SSD1327 OLED controller are simple enough, and only a few lines of code to send a whole frame buffer over I₂C. As such, I decided to make some 16 grey level renders of my existing font designs. There is also a logo (configurable).

I found the CO₂ reading was liable to change quite quickly. This is great, except just standing looking at it caused it to change a lot due to your breath. So I ended up damping the reading (biased average with last reading) to remove spikes.

I also decided to round the values for reporting on MQTT so that it is not flooding with updates every second. Configurable rounding, preset to CO₂ at multiples of 10ppm, RH at whole percent, and Temp at 0.1℃. I also added some hysteresis to the reporting.

Obviously I have my air-con control code working with it - just had to tell it a different topic to watch for on MQTT, but I added logging of CO₂ and R/H as well just for fun.

And finally I added settings so it can send MQTT to turn a fan on or off based on CO₂ levels.

It is interesting to see how CO₂ changes during the day.

Overall I am very pleased with it. It is all on GitHub (here) with PCB milling, 3D printed case design, and code. Have fun.

P.S. The OLED displays are made of glass, and very very very easy to accidentally break. Especially if the 3D case design is a fraction out! 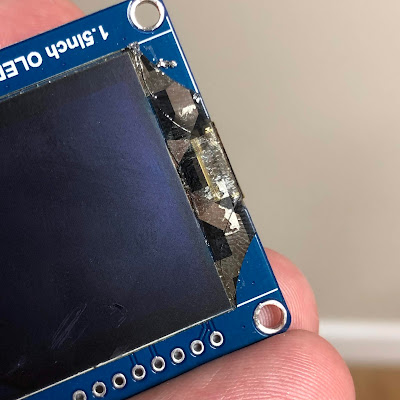 P.P.S. I have one by my bed, and it is quite bright, so I now have an MQTT contrast command tied in to the sleep tracking stuff so when I get in to bed it goes dim :-)