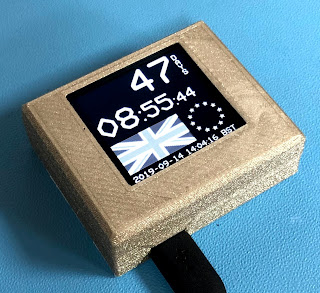 Having made the environmental sensor, I have now cut down the design to just the processor and OLED display so I can make other things.

One example is a Brexit clock. I have put the code and PCB and 3D case on GitHub (here). It may need regular code updates, obviously :-)

It did raise one issue though. Most of the Brexit clocks I see, like Sky News's (here) seem to be an hour out. Brexit is at 11pm but they show days plus time that would be midnight.

Now, I know why... Someone is being lazy and simply dividing time of Brexit minus time now by 86400 and ignoring the clock change. One of the days between now and Brexit is 25 hours long, but that does not stop it being "one day".

My clock gets it right, obviously.

There are other uses for the app - and as I am taking one of my grandsons on a his first cruise, I thought he may like this... 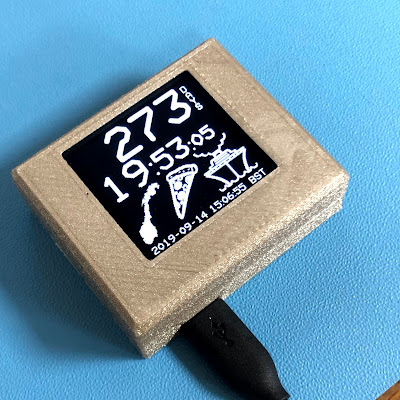 He heard the phones in the suite have a button labeled "pizza" :-)
He is already packing!

P.S. This is why I have a milling machine and a 3D printer! I came up with the idea over coffee this morning at around 9am. I had to design a new PCB and a new case, mill the PCB, 3D print the case, and assemble it all, as well as make the code. I had a working version by around noon. My grandson is going to love this, I am sure!
at September 14, 2019