Obviously I have tinkered with smart light switches, and the like, for a long time.

You only have to look on Amazon to see a lot of different options now, but there was one simple combination that has been lacking. I have been looking for this for ages, and finally they now exists - the Shelly 1. But more on that at the end of this blog post. First a bit of background.

One of the problems is UK lighting circuits have a live and switched live to the light switch from the light fitting. This means that, at the light switch, there is no neutral. The only way to power a "smart switch" is through the light bulb, which is not ideal. Indeed, it is not that reliable as it also depends a lot on the type of light bulb in use. This means that almost all smart light switches need the wiring changed to allow live and neutral to the light switch. In simple partition walls that is not too hard for an electrician to pull through a new cable, but it is not always so easy. The other big issue is that you almost always have to change the back box from a shallow back box to a deep one, and that can mean chiselling out some brick, etc.

Basically, fitting a smart light switch in the UK is a pain, needs an electrician to do properly (and I am not even trying to address the regulatory issues here), and costs a lot more than just the switch itself.

There are now, finally, some UK variety smart switches, e.g. DS-102L. It has a bypass capacitor to fit across the light bulb so as to allow enough in-line power for the switch. This again is fiddly for a non technical person, but saves running new wiring. I am making the huge assumption that this is valid wiring in the UK as well.

There are a few approaches to smart lights though...

The other problem is how you control your smart light switch. Obviously some sort of app on your phone, or integration with Alexa or Siri or something. But then what?

We tried - we really did. I got a simple smart light switch, and we decided to try and get it working as intended. I have used these for years, but always re-flashed with new firmware, so trying it as sold was new for me. A (non technical) relative wanted to simply be able to work some lights, from her phone, remotely, so this seemed like a good idea. I also asked my son to try, as a new pair of eyes. No joy!

We even set up a bog standard router with NAT and WiFi (yes, NAT is evil), and still could not get the damn thing to work as intended. They come with an app, which was easy to download, but then we could not get anything to actually work. This did surprise me, to be honest.

We ended up putting a raspberry pi running MQTT (mosquitto) and a tasmota flashed in-line power plug for a lamp.

The other concern I have is that these things normally use servers somewhere in the Cloud, i.e.on the Internet. No idea where. No contract in place with whoever runs the servers. No recourse if they stop working. No idea if usage patterns are logged or sold somehow. And all this relying on working Internet.

Call me old fashioned, but I like a light switch that does not rely on working Internet and someone else's server in China!

Of course this means having my own "hub" of some sort - in my case a raspberry pi and MQTT server, but this could be some "home hub" or some such.

If you have not encountered Tasmota before, do take a look. It is free open source software that runs on most of these smart switches and devices. It means re-flashing the device, and they vary in complexity from "having a header you can just plug in to with a serial lead", to "soldering bits of wire inside the switch". But once re-flashed they can be re-configured and re-programmed over the air (WiFi). As for actually flashing the code - you just need a simple serial lead and the tasmotizer app, and it is very easy.

The main three options I would consider are these. All can be flashed with Tasmota.

I have been after this for a long time - I even considered making one myself - something simple like the Sonoff Basic, but with a proper switch input. The Shelly 1 seems to be ideal for light controls in the UK.

It can go behind the light fitting in the ceiling where the live and neutral are already present, so solving the fact we don't have neutral at our light switches. But it can take the switched live as an input. Obviously it can have a default mode of operation where the switch works the light, so even no Internet or WiFi does not stop it working in the obvious way.

It has a simple header for re-flashing (please do take note of the warnings about these being at live voltages when connected to power!). So loading Tasmota is a doddle.

This means that with no extra wiring, and no changing to a deep back box, and no change of light switch to something cheap and tacky white plastic. It is easy to make a normal light fitting WiFi connected.

It is also 16A not 10A, so much more useful than the Sonoff basic (obviously for things other than lights, which get nowhere near that rating).

I have one coming today :-)

P.S. For those that have not used tasmota, you can have an input as a button or a switch. A button works toggling an output on pressing the button. A switch toggles the output on change of input. So a normal light switch would be connected in switch mode, and turn on/off when changed. If you override via MQTT you simply swap the way it works, much like a normal two-way light switch arrangement, so the switch now works in reverse until you next override.

P.P.P.S. I had not heard of Shelly before, but they have loads of cool stuff, all looks quite sane, including the simple to re-flash header, and the fact they will do MQTT anyway. Very cool. shellystore.co.uk 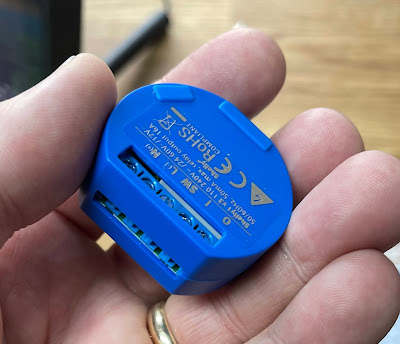