As some of you will know, I have moved to sunny Wales. My new home did not have air-con so I am finally having that installed. I have gone for a ducted system this time (yes, more expensive) as it allows simple vents in the ceiling rather than a large indoor unit in the rooms, and it should be quieter. However, the main reason is that we now live on a main road, so cannot really open windows to any of the bedrooms - the ducted system I have gone for has a "lossnay" which provides fresh air as well, and saves us having to open windows. More on the actual aircon later, this post is just about the quite unbelievably bad user interface.

For a start this is an "industrial" air-con, which sadly means it is a simple wired controller and not WiFi, or anything useful like that - do not be surprised to find a "reverse engineering Mitsubishi air-con controllers" in a future blog post :-)

The air-con is three parts, an outdoor unit, and indoor unit (GUG) which does the cooling/heating, and a lossnay which does the fresh air (filtering and heat exchange). This is in the loft... The lossnay is on the left and the GUG is on the right. To be clear, the GUG is designed to work with a lossnay, it cannot work without one as it has no fans of its own. I think the lossnay could be used for fresh air without a GUG though. 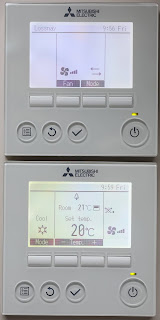 The controller is not too bad, it has a dot matrix LCD and buttons. It is newer than some where they have fixed icons on LCD. It has the obvious controls: mode, temperature, and fan speed. Good.

But, no. The fan speed says "unsupported function" if you try and change it. You need to have a separate "lossnay controller", which basically just lets you set the fan speed.

But there is a 4 wire link cable between the lossnay and GUG, what the hell is that used for? Well, all I can see is that it means is it turns off the lossnay when turning off the GUG. Remember the GUG can only be used with a lossnay attached, this is not some obscure optional extra.

We (myself and the installer) found the setting to tell the GUG it has a lossnay connected (but this unit cannot work without one so why is there even a setting?!), and it shows a nice icon indicating it has a lossnay. But still does not let you control the lossnay from it. Why? Also, the icon looks like it shows the "mode" the lossnay is in (yes, it seems to have a non heat exchange mode, which is pointless) and fan speed, but in fact the icon does not change to actually show the mode or fan speed. How shit is the UI?

Apparently you can run the lossnay without a controller, and the GUG will turn on/off at full fan speed, which is not that useful.

Of course, this also means you cannot run the fan in an auto mode as the lossnay does not know what the GUG is doing. So you cannot have full fan to get to temperature and quiet fan to maintain temperature.

Oh, and crossed zeros. A pet hate of mine. This is not a hand written COBOL coding sheet in the '70s, it is a temperature display. Why make it look like 28℃ not 20℃ to anyone with poor eyesight?

Another gem is that you can turn the temperature down to 12℃, nice, but then it snaps back to 19℃. Why 19℃, that is way higher than I have seen on other air-cons - it will probably do as I would rarely want it that cold. But still, why? And why allow setting below that if it cannot be set lower? Just stupid UI again!

Another thing that seems odd is that the controllers are identical. Same display, and buttons. Looks like identical hardware. The lossnay controller even has a thermometer in it even though it does not need it. But they must have different firmware as they cannot be swapped around. I would have made one controller and made it generic to work anything, but no, they are different!