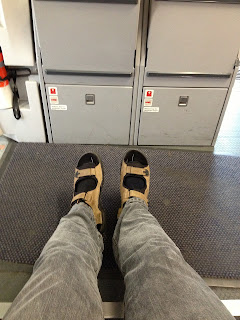 So, we flew EasyJet to Rhodes. There are only a few airlines direct to Rhodes and they appear to all be "holiday" airlines. This is flights that don't have business class or first class even if you wanted them, and we figured they were much the same as each other. Previously flying Monarch was a nightmare - there was no room for my knees!

Don't you love the diagram of the "brace position" you are meant to adopt - it always assumes there is space to bend forward somehow between the seats. Those were the days.

OK, there appears to be a "super speedy boarding option" if you are a family of 6 with a wheelchair, which was a slight disappointment after standing front of the queue at the plane for 5 minutes, deciding amongst ourselves where we would sit (front row, which we could see) only to have just one too many seats on the front row occupied ahead of us. Oh well.

Anyway, Sandra and I on the front row block of three seats. The rest of the people come on and they board them from the back forwards telling people blocks of rows to pick a seat in. Makes sense as it stops people blocking the aisle. The result was that the last people on the plane were behind us. Even when the final people on the plane were told "any available seat" as there was only one next to us people picked other seats. Ended up with two of us on the front three seats with as much leg room as you could possibly want, and convenient for the toilet (handy, as Sandra is not feeling well).

Knowing not to expect a meal we brought crisps and drinks anyway (bought in departures) so ate and drank when we wanted and what we wanted.

Overall it was better than most business class flights I have taken, which was a bit of a shock. I am sure most of that is luck. We'll see on the way back.
Posted by RevK at 21:31:00