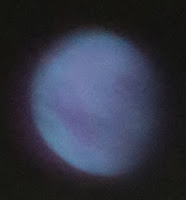 It seems the term "blue moon" is not as well defined as I thought. My understanding was the second full moon in a calendar month, but it seems more historically correct that it is the extra full moon you get every few years (where there are 13 full moons not 12 in a year). The lunar cycle (29.5 days ish) is close to the average days in a month (30.4 days ish), so every few years there is an extra full moon. "blue" is actually belewe (meaning "betrayer" moon) and relates to a full moon being a tad early to be the basis for Easter so the following full moon is used instead. All a tad complex. Based on wikipedia, so much be right!

However, today we have a blue moon in the simple meaning of a second full moon in a calendar month, and it has been widely reported in the news. Technically it depends on your time zone as some places will have had the month already end by 13:57:45 UTC today when it happened, just to add more to the confusion.

It really should not need pointing out that the blue moon is not actually blue! There are atmospheric affects that can make the moon look bluer than usual, but none that are based on a particular choice of calendar. This daft question is not helped by a blue tinted moon image shown on news and web sites reporting today's event. So what on earth is the blurry blue blob shown above? 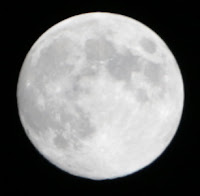 Well, Mikey was trying to take a picture of the moon. It means manual exposure generally as the camera will not get it right. You can get a pretty good image even hand held with a 200m lens (see right), but during his efforts he happened to snap a very over exposed shot (below) which is a bit odd.

The exposure is so long and the sky so dark that the camera has picked up some sort of internal reflection in the lens. The coatings on the lens mean it is tinted blue. It is also, as you may realise, upside down.

Oddly, and not planned like this, we have been in Greece for the full moon this month, both of them! 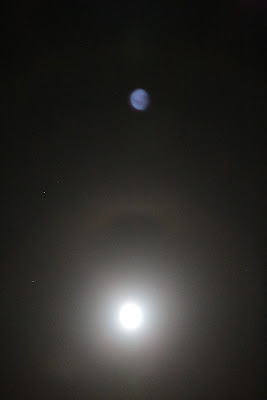