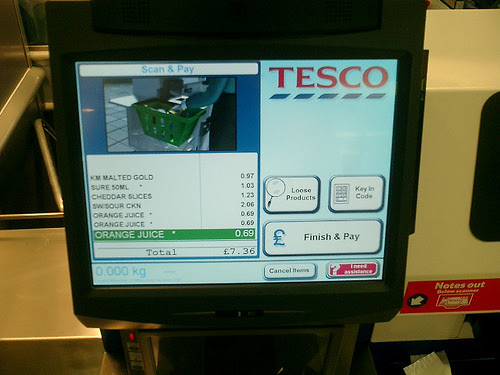 I was moderately impressed with the Tesco Express at the top of the hill by Savoy Place on Saturday. I was at ORGCON2013 at the IET, which is an nice venue, but they ran out of food. Yes, they got more later, but not before I went for a walk.

It is a small shop, and a sensible selection of Tesco goods, mostly centred on the snacks, as you may expect, but pretty good.

Except for a tiny detail. The tills were more compact that normal stores, as makes sense, and were a row of bagging/basket and till alternating. I did not read the big clear signs, and as I did not have a basket for three packets of crisps, I put them on the basket area, not the bagging area. D'Oh!

So, the till sensibly told me I was an idiot. It said, in text on screen "place item in bagging area" and spoke to me to say this, and even did an on-screen animation of a shopper placing items in the bagging area.

This is good, as the animation and text and audio covers blind, deaf, foreign, and stupid all in one go.

Except! The animation clearly showed the shopper placing the items low down on the right, as per the full size self service tills. This was confusing as I had placed low down on left. The design was such that it seemed "left" was the obvious side, but in fact the bagging area was higher up on left. I even tried falling for the animation putting on the right, low down. I was put right by the one supervising shopkeeper. I was not alone at that instant in my confusion - correcting numpties not reading the signs seemed his main job.

Why have wrong animation?

I can't help feeling the people making the tills have animation that works for this, and it is a simple config issue. Some software designed is cringing reading this, maybe. I bet the shopkeeper spends all day correcting people and either has no interest in reporting the error or no means to. As you go up layers of management or franchise you may find people uninterested in fixing this minor issue. It probably causes annoyance and wastes time every few minutes of every day in thousands of shops - but nobody cares enough to say so.

Amusingly, whilst looking for an image for this post I found one showing bagging on the left, albeit low down, which makes me even more confident they have animations for every physical configuration if only someone cared enough to fix it in this case.

Ultimately the world needs more OCD. Then stuff would be just right. Though I was told OCD should be CDO to be in alphabetic order, as it should be. Sorry if anyone if offended by that but it is my blog :-)
Posted by RevK at 17:42:00